The plea of guilty to joining the citywide unlawful protest on Aug 31 that year comes a week after Lai and six more activists were found guilty in a separate court case over unauthorised assembly.

The other activists who pleaded guilty were Lee Cheuk-yan and Yeung Sum.

“I plead guilty, but I’ve done no wrong in affirming the rights of people to peaceful procession and I believe history will absolve me,” Lee said.

Sentences in both cases are to be handed down later. The maximum possible punishment is five years in prison.

The 2019 pro-democracy protests were spurred by Beijing’s tightening squeeze on wide-ranging freedoms promised to Hong Kong upon its return to Chinese rule in 1997, and plunged the semi-autonomous city into its biggest crisis since the handover.

Beijing has since consolidated its authoritarian grip on Hong Kong by imposing a sweeping national security law, punishing anything it deems as secession, subversion, terrorism or collusion with foreign forces with up to life in prison. 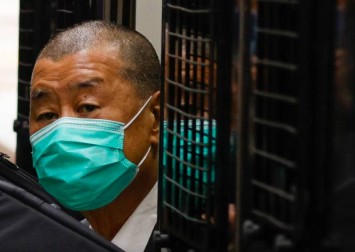 Supporters of the law say it has restored stability after the prolonged unrest of 2019.

Lai, founder of the Apple Daily tabloid, has been a frequent visitor to Washington, meeting officials such as former Secretary of State Mike Pompeo, to rally support for Hong Kong democracy, prompting Beijing to label him a “traitor”.

Other cases facing the tycoon, who has been in jail for months after being denied bail in another case, include charges of colluding with foreign forces under the new security law.

His repeated arrests have drawn criticism from Western governments and international rights groups.

The Aug 31, 2019 clashes were some of Hong Kong’s worst, with police firing tear gas and water cannons at pro-democracy protesters who threw petrol bombs.