Residents carry bags of grocery inside a locked down portion of the Jordan residential area to contain a new outbreak of the coronavirus disease (Covid-19), in Hong Kong, China, on Jan 23, 2021.

HONG KONG - Hong Kong reported a record 614 new Covid-19 cases on Monday (Feb 7), health authorities said, in the biggest test yet for the city's zero-Covid strategy as it grapples to contain a growing outbreak.

The global financial hub, which is following mainland China's strategy of suppressing all coronavirus outbreaks as soon as possible, has seen cases soar since January with over 2,000 infections compared with just two in December.

In addition to the confirmed infections, there were more than 600 other preliminary positive cases on Monday, authorities said.

Hong Kong recorded 342 cases on Sunday, slightly below the previous day's record of 351 cases. Dozens of bank branches, including outlets of HSBC and Bank of China, suspended operations on Monday to help curb transmissions.

Health Secretary Sophia Chan said over the weekend that she expects cases to rise "exponentially".

The former British colony has become one of the most isolated cities in the world, with flights down around 90 per cent due to strict coronavirus regulations and schools, playgrounds, gyms as well as most other venues shut. Restaurants close at 6pm Singapore time, while most people, including the majority of civil servants, are working from home.

The economic and psychological tolls from the hardline approach are rapidly rising, with measures becoming more draconian than those first implemented at the start of the pandemic in 2020.

Government quarantine facilities are also nearing their maximum as authorities struggle to keep up with their rigid contact tracing scheme.

Thousands of people queued up in rainy weather across the city on Monday for mandatory Covid-19 tests, ordered for people who had visited locations where infections had been reported.

In total, Hong Kong has recorded 213 Covid deaths and around 15,000 cases since early 2020, far less than other similar major cities.

Health experts said the city's current strategy of shutting itself off as the rest of the world shifts to living with coronavirus, is not sustainable.

The official Chinese Communist Party newspaper, the People's Daily, said in an editorial on Monday that a "dynamic zero infection" strategy is the scientific option for Hong Kong, suggesting that no change is being planned. 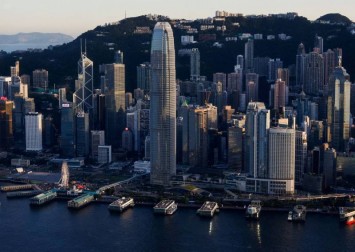 Around 80 per cent of the city's 7.5 million residents have had at least one Covid-19 jab but the majority of elderly remain unvaccinated, government figures show.

Out of these around 40 per cent have received the Chinese-made Sinovac vaccine, believed to be far less effective against the disease than the one produced by Germany's BioNTech, the other vaccine available in the city.

Infections have been recorded across government departments from hospitals and housing to the independent anti-corruption body.

Two pet cats tested positive for coronavirus, the government said on Friday, as it urged pet owners to avoid kissing animals. In January, authorities ordered a cull of more than 2,000 hamsters in dozens of pet shops, after tracing an outbreak to a worker in a shop where 11 hamsters tested positive.

The government has also tried to assuage worries over a shortage of food from the mainland after some cross-border truck drivers tested positive. Several drivers have been forced to isolate but overall fresh food supply “remained stable”, it said on Sunday.

There have been shortages of imported foreign food and cost increases due to tight air restrictions.