How to cope with China virus? Stay in and see The Flu

A passenger wearing a mask at Shanghai railway station in Shanghai, China, on Jan 22.

Threatened by a new virus outbreak, many Chinese have been turning to an online plague simulation game and a disaster movie called The Flu as part of coping mechanisms.

The new flu-like coronavirus has killed nine people and infected more than 400 in an outbreak originating from the central city of Wuhan, spreading fear of contagion globally and rattling financial markets.

Plague Inc, a strategy simulation app by Britain-based Ndemic creations, was by Jan 22 the top-paid game on the iOS operating system on China's Apple Store. It allows users to create and evolve a pathogen to destroy the world.

"The best way to conquer fear is to confront fear," said one commentator on China's Twitter-like Weibo.

South Korean disaster flick The Flu was the most searched-for movie on Chinese media review and social networking site Douban on Jan 22.

Furthermore, 11 out of 14 top-ranked articles on content platform Toutiao were related to pneumonia, as were over half of the 50 most-read topics on China's Twitter-like Weibo.

The virus outbreak has coincided with China's Lunar New Year celebrations this weekend when millions travel at home and abroad for holidays and family reunions. 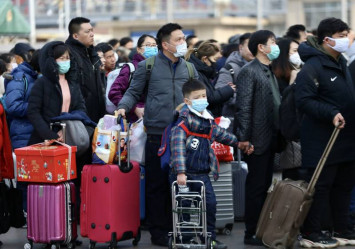 But the usual bonanza for the tourism and consumer industries may be hit as some people were cancelling trips and avoiding public areas like cinemas and shopping centres.

Blockbuster movies set to premiere over the holiday have seen sales momentum waning. In Wuhan, moviegoers who had pre-paid were offered refunds, according to ticket-booking platforms Maoyan and Taopiaopiao.

"It's understandable the virus could prevent people from coming to cinemas," lamented one manager at a Beijing cinema, who asked not to be named. She encouraged people to still come but to take precautionary measures like wearing masks.