Jack Ma, founder of Chinese tech giant Alibaba, is among the world's richest people but he has now emerged as a member of another club: China's 89-million-strong Communist Party.

The billionaire's Communist bona fides were revealed by the People's Daily, the party's official mouthpiece, in an article praising contributors to China's development.

He is not the first nor likely the last Chinese super-rich capitalist to join the party, which counts property titan Xu Jiayin and Wanda Group founder Wang Jianlin among its billionaire members.

But Ma's membership had not been widely known until now as China's richest man had previously suggested that he preferred to stay out of politics. 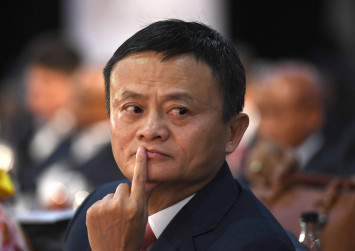 In Monday's article, the People's Daily said Ma was a party member who has played an important role in pushing China's Belt and Road global trade infrastructure initiative -- a pet project of President Xi Jinping.

He has also been honoured as one of the "outstanding builders of socialism with Chinese characteristics in Zhejiang Province", where Alibaba is based, the daily said.

Joining the party can be helpful to private businessmen and women in the country as they navigate a complicated business environment where the state-led economy dominates many industries and private business can be unwelcome.

In China, company chiefs need the backing of the Communist Party to get rich, but they also need it to survive.

It is a relationship that -- when the political winds change -- can hang them out to dry, experts say.