John Lee presented his wife Janet Lam with a bouquet of flowers as she took the stage to stand with him.

The sole candidate garnered support from 1,416 members of the 1,461-strong overwhelmingly pro-Beijing election committee. Some 1,428 people cast their votes, a 98 per cent turnout.

At the balloting venue at the Hong Kong Convention and Exhibition Centre in Wan Chai, about 7,000 police officers were mobilised to ensure security.

"Whether or not you supported me, I thank you very much," Mr Lee said in a brief speech following the announcement of the result.

He also wished everyone a happy Mother's Day, presenting his wife Janet Lam with a bouquet of flowers as she took the stage to stand with him.

Mr Lee, a career policeman and Hong Kong's former No. 2 official, required 750 votes to win. His victory was already all but assured after securing 786 nominations from members of the election committee to qualify for candidacy.

The more than 99 per cent support from the committee is far better than that of other chief executive candidates before him, though the odds were stacked in his favour as all but one of the committee are from the pro-establishment camp. 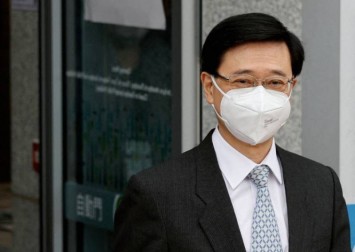 Hong Kong’s first chief executive Tung Chee Hwa received 80 per cent of support from a 400-strong selection committee in 1996, defeating two rival candidates. In 2007, his successor Donald Tsang beat a pro-democracy challenger with 81 per cent of votes from a 796-member election committee.

There was no vote in 2002 and 2005 as Mr Tung and Mr Tsang were declared elected unopposed in those years.

"We believe John Lee has the leadership to solve all (of Hong Kong's) problems as far as he can," said Ms Maria Tam Wai-chu, a senior politician and Basic Law Committee vice-chairwoman, as she arrived at the venue to cast her vote on Sunday morning.

Opposition party the League of Social Democrats staged a rare protest in Wan Chai amid heavy police presence earlier in the morning, chanting “Power to the people, universal suffrage now”. The demonstration ended within the hour.

Mr Tik said his centrist political party Third Side had concluded that the multitude of challenges Hong Kong faces today can be resolved only through communication and cooperation.

Opposing each other would result only in greater harm, he said.

Mr Tik added that he hoped Mr Lee, upon taking the reins of governing the city, would be receptive to the people's opinions, accommodate different voices within society, and come up with concrete measures to carry out his four key policy directions.

Mr Lee had in his election manifesto last week outlined four broad areas he would focus on if he takes the top job. They are to strengthen governance; provide more, better and faster housing; boost Hong Kong's competitiveness and pursue sustainable development; and build a caring, inclusive society with greater upward mobility for its youth.

He has also said he will set key performance indicators within the first 100 days of his administration to ensure accountability towards fulfilling his pledges.

Two in every three Hong Kong people approve of Mr Lee taking office as the city's leader, according to a recent survey.

The Hong Kong Research Association polled 1,045 Hong Kongers by phone between April 29 and May 3, local paper The Standard reported.

Nearly a quarter of the respondents were opposed to Mr Lee as chief executive, while 9 per cent said they could not tell or had no comments.

Asked what they thought was the most urgent issue at hand for Hong Kong's next leader to tackle, a third of the respondents pointed to the city's land and housing crisis, while 16 per cent said it was restoring social harmony.

Hong Kong's next chief executive will face a series of pressing and daunting tasks upon ascension to the top job as the city continues to reel from the social and economic upheaval arising from 2019's pro-democracy protests and the past two years of stringent pandemic restrictions.

Mr Lee, if he takes the role, is set to find himself - like all of the Chinese-ruled territory's previous leaders - sandwiched between Beijing's demands and Hong Kong people's interests.

It would be his third promotion in five years.

He was promoted to chief secretary only last June. Prior to that, he had headed the Security Bureau from 2017, after spending five years as undersecretary for security.

He was a career policeman, with 35 years in law enforcement under his belt.

As chief of the Security Bureau in 2019, Mr Lee played a key role in the push for an extradition Bill that would have allowed for criminal suspects to be transferred to mainland China, among other territories, to face trial.

The proposal sparked the massive, often violent, protests across Hong Kong in 2019. It was eventually withdrawn.

Beijing imposed a wide-ranging national security law on Hong Kong the following year, and Mr Lee then led a crackdown on dissent under that law.

He is under sanctions by the United States for his role in compromising Hong Kong's autonomy and restricting its people's freedoms.

Mr Lee is married with two sons. He holds a master's degree in public policy and administration from Australia's Charles Sturt University.