SHENZHEN, China - Heads turn when An Hui and Ye Jianbin walk down a street in the Chinese city of Shenzhen with their triplets, who were conceived with help from a human egg donor and a surrogate mother.

People are mostly curious about their unconventional family, said An, adding that it was not always the case in China where gay couples have long battled conservative Confucian values.

"I'm lucky because I was born in China during a period of rapid change. Today's society is far more tolerant," the investment manager told Reuters at his office in Shenzhen's financial district. 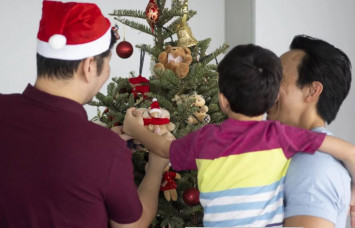 The two men wanted a family and began exploring the option of in vitro fertilization (IVF), with help from a human egg donor and a surrogate mother.

In 2014, a Thai woman gave birth in Hong Kong to three boys - An Zhizhong, An Zhiya and An Zhifei - who were conceived using human eggs provided by a German fashion model, according to An.

He declined to identify the women or the surrogacy company that organised the procedures.

The issue of lesbian and gay couples having access to medically-assisted reproductive treatments such as IVF has stirred political debate in several countries, including more recently in France and Israel.

China's government has not stated a clear position on the country's LGBT community, Yanzi Peng, Director of LGBT Rights Advocacy China, a group based in Guangzhou.

"The best word to describe the attitude of the Chinese government is 'ignore'," said Peng.

"It's hard to gauge their exact attitude. They don't outright object to the LGBT community because that would really go against international attitudes on this issue," Peng added.

Other advocates for the lesbian, gay, bisexual and transgender (LGBT) community say China should relax laws that limit childbearing to heterosexual couples.

"Homosexual couples have no way to legally use reproductive technology. Many people must go abroad to pay an extremely high fee to have children," said Bin Xu, director of Beijing-based rights group LGBTI+.

After decades of Communist prudery about sex of all kinds, LGBT Chinese have in recent years been openly tackling bureaucracy, legal uncertainty and entrenched social norms to assert their place in society.

While large Chinese cities have thriving gay scenes and same sex relations are not illegal, the government has shown no interest in legalizing same sex marriage, and launches periodic crackdowns on gay content online or elsewhere.

An Hui, who is a member of the ruling Communist Party, said its time to rethink traditional views of family and marriage as China grapples with an aging population and declining birth rate.

China moved in 2016 to allow couples to have a second child, relaxing curbs dating back nearly four decades. State media said this year the government was considering scrapping all limits on the number of children a family can have.

"In China, lots of people say a family is a bond between a man and a woman, but that's not necessarily the case," An said.