Residents wearing face masks line up to get tested for the coronavirus disease (Covid-19) in Macau, China, on July 4, 2022.

HONG KONG — Macau shut all its casinos for the first time in more than two years on Monday (July 11), sending shares in gaming firms tumbling as authorities struggle to contain the worst Covid-19 outbreak yet in the world's biggest gambling hub.

The city's 30-plus casinos and other businesses will shut for one week and people were ordered to stay at home though short trips for essential services were allowed.

Police will monitor flows of people outside and stringent punishments will be imposed for those who disobey, the government said.

Although many casinos have been effectively closed for the past three weeks with only minimal staffing allowed, the more drastic measures hit investor confidence hard. Some analysts predicted that any recovery in gaming revenue might not happen until the end of the third quarter or during the fourth quarter.

"We would probably need to write-off July and likely August as well from the models," said DS Kim, an analyst at J.P. Morgan.

Macau has recorded around 1,500 Covid-19 infections since mid-June. Around 19,000 people are in mandatory quarantine as the government adheres to China's "zero-Covid" policy that aims to stamp out all outbreaks, running counter to a global trend of trying to co-exist with the virus.

More than 30 zones in the city that have been deemed high risk are now under lockdown, meaning no one is allowed to enter or exit for at least five days. While the government said it was not imposing a citywide lockdown, the stringent measures mean Macau is effectively closed. 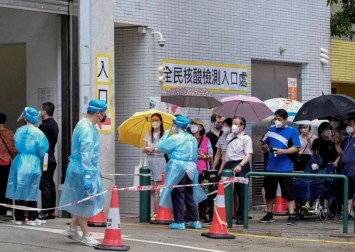 Casinos were last shut in Macau in February 2020 for 15 days. The government has previously been hesitant to close casinos due to its mandate to protect jobs. The industry employs most of the population directly and indirectly and accounts for more than 80 per cent of government revenues.

Frustration is mounting at the government's handling of the outbreak. Fights have broken out at testing centres while some residents have had to queue for more than 20 hours to access healthcare facilities.

Residents will be required to take part in mass Covid-19 tests four times this week. They have already been tested six times since mid-June and are expected to do rapid antigen tests daily.

More than 90 per cent of Macau's 600,000 residents are fully vaccinated against Covid-19 but this is the first time the city has had to grapple with the fast-spreading Omicron variant.

Authorities have added two hotels in popular casino resorts to be used as Covid-19 medical facilities as they try to increase capacity to handle the surge of infections.