#china#Hospitals#In Case You Missed It 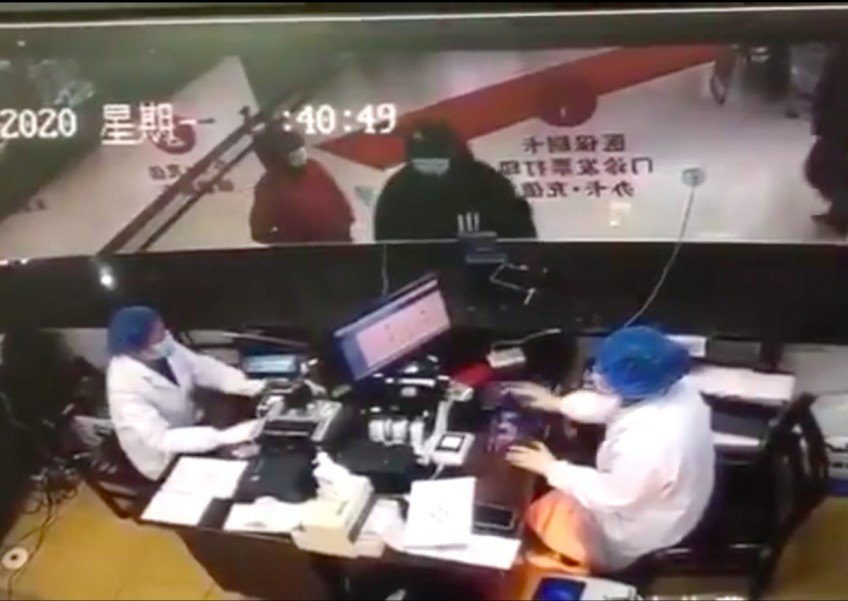 Apparently unhappy that the hospital had run out of the medication he needed, a man in Xiaogan, a city in Hubei, China, pulled down his mask and coughed at the hospital staff.

The two staff members immediately got up from their seats and ran away from him.

According to Shangyou News, the man had just returned home to Xiaogan from Wuhan when he started feeling feverish. He had initially gone to Xiaogan Central Hospital for treatment but hadn't recovered, hence he went to the Women's and Children's Hospital for a second checkup on Monday afternoon (Jan 27).

Even though the doctor wrote a prescription for him, the patient was informed that the medication was unavailable.

In the hospital's CCTV footage, the man could be seen handing over a card to the staff behind the counter before pulling down his mask to cough at them.

A woman could be heard explaining that the man had a high fever of 39 degrees for four days. After finding out they had run out of the medicine in his prescription, the patient allegedly threw a temper and demanded a refund.

The man was merely suffering from a case of the regular cold and fever, a hospital representative told PearVideo.

After the patient left, the area was quickly disinfected and the hospital reported the incident to the police department. The man has since been located and he has consented to co-operate with the authorities.

"This incident left a lot of our staff angry," the director of the hospital told The Paper. "But we can understand how the patient felt at that moment. We don't want to cause problems for him either."