BEIJING - Oil from an Iranian tanker that sank in the East China Sea has diffused into four separate slicks, covering a combined area of just over 100 square kms (39 square miles), Chinese authorites said on Thursday.

The large tanker Sanchi (IMO:9356608) sank in the worst oil ship disaster in decades on Sunday, raising worries about damage to the marine ecosystem. The bodies of two sailors were recovered from the ship while a third body was pulled from the sea near the vessel. The remaining 29 crew of the ship are presumed dead.

The Chinese Ministry of Transport said on Wednesday a salvage team had located the wreck, which was at a depth of 115 metres (377 feet) under sea level, and was preparing to send underwater robots to explore it. 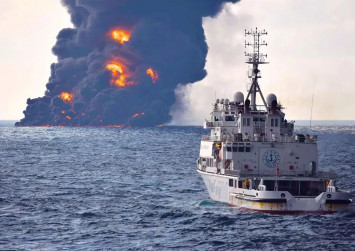 The SOA said on Thursday it had collected water samples from 19 spill sites, and found water from five sites had petroleum substances at levels exceeding standards.

Clean-up teams were continuing to monitor the wreck area to assess the drift and diffusion of the oil spill and the ecological impact.

The Sanchi had been adrift and ablaze after crashing into the freighter CF Crystal (IMO:9497050) on Jan. 6. Strong winds pushed it away from the Chinese coast, where the incident happened, and into Japan's exclusive economic zone.