In post-lockdown China, student mental health in focus amid reported jump in suicides

A thermometer and a sanitising gel are seen outside a classroom during a government-organised media tour at a high school as more students returned to campus following the coronavirus disease (Covid-19) outbreak, in Shanghai, China May 7, 2020.

SHANGHAI - Some Chinese students returning to school after lockdown are grappling with familial conflict while others are stressing over how coronavirus disruptions have affected their academic performance, teachers and school counsellors say.

The heightened post-lockdown anxiety has become a matter of central government concern as domestic media report a spate of suicides by young people.

It has also led to unprecedented measures by schools and local governments to focus on student mental health - a topic that like suicide has often been taboo in Chinese society.

"There have been some heartbreaking incidents as schools reopened," Yan Wu, vice mayor of the southern city of Zhuhai, said at China's annual parliamentary meeting last month.

"This highlights the importance and urgency of promoting mental health development in young students," he said.

At the parliamentary meeting, at least four delegates put forward proposals for more attention to be paid to students' psychological needs.

In one Shanghai district, there have been 14 suicides by primary and secondary school students so far this year - more than annual numbers for the last three years, Li Guohua, deputy mayor of Shanghai's Pudong New Area district, told financial magazine Caixin in May.

"It's the tip of an iceberg," he was quoted as saying.

Reuters was unable to contact Li or confirm the number with local authorities.

The state-owned Health Times also reported on Sunday that nationwide, 18 students had jumped off buildings in the past three months and quoted experts calling for more focus on student mental health. The article was, however, soon deleted - a common occurrence in China when sensitive topics are raised.

As China eased measures to stem the outbreak of the coronavirus, students began shifting from online classes back to classrooms in March.

One online survey of 1.22 million primary and secondary students conducted that month by the southern province of Guangdong's health commission and a university concluded that 10.5 per cent were potentially grappling with mental health issues. Detailed findings were not published. 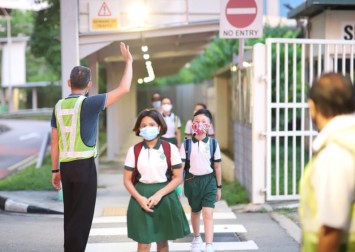 The city of Wuhan, the epicentre of the virus in China, Hainan province and Shanghai are among local governments providing new "life education" classes aimed at helping students deal with stress and grief.

In one such class, students were divided into two groups who raced to form English words, but one group was given a much harder set of letters - a prompt for a discussion about stressful situations.

"The purpose was to make students aware that feeling stressed is natural, and that how you deal with that stress can lead to different outcomes," said the teacher.

She was one of six Shanghai-based teachers and school counsellors interviewed for this story. All declined to be identified as they were not authorised to speak to media.

"Reopening after the lockdown was very different compared to a normal return by kids after winter vacation," said a counsellor at a Shanghai high school.

She said her workload has increased as students consult about academic pressure and study plans, and that she has online meetings with at least two families every week prompted by requests from students.

"I am hoping the virus will teach kids how to deal with changes in life. Life is full of difficulties," she said.