A pregnant woman in China has found herself in hot water after flinging a bowl of scalding soup at a mother-daughter duo in a Xiangcheng restaurant located in central Henan.

The 28-year-old's act of rage on Tuesday (June 11), was caught on surveillance footage and left the 11-month-old girl with burns to her back and buttocks.

Only identified as Ren, the woman was reportedly enraged due to the baby making noise and banging her spoon loudly on the table.

According to Chinese media sources, Ren had been in a foul mood that evening due to a quarrel with her husband before the incident occurred.

She also had a confrontation with the toddler's mother, Yang, over the child making noise, before her husband persuaded her to leave the restaurant.

Ten minutes after stepping outside, Ren returned to exact her revenge, chucking a hot bowl of Mala soup at the mother and child and leaving swiftly after the act was done.

The police were subsequently called and the baby was quickly given medical attention.

Yang said, in a report carried by Chinese media outlet Sohu, that her daughter has refused to eat or drink after the attack and the doctor said the child had suffered a shock. 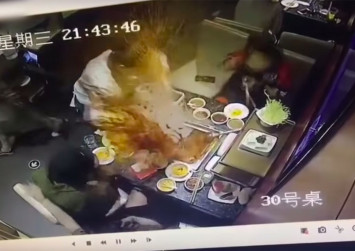 The Xiangcheng police issued Ren a 15-day detention and a 500 yuan (S$99) fine, but could not take her into custody as she is pregnant.

A restaurant employee estimates that she is six to seven months along.

Chinese criminal law prevents women from being detained or jailed if they are pregnant or nursing their children.

The police have also verified that Ren has paid the victim's medical bills. They are currently assessing the seriousness of the pair's injuries as they carry out further investigation.

#china #Children and Youth #attacks #In Case You Missed It