A woman in China got a taste of what that felt like when she was forced to quarantine inside a hotpot restaurant after a Covid-19 case was detected there.

Imagine being trapped in your favourite restaurant for three days, where you could eat unlimited amounts of the food you love.

Until you’re just… sick of it.

A woman in China got a taste of what that felt like when she was forced to quarantine inside a hotpot restaurant after a Covid-19 case was detected there.

According to news outlet Orient Today, the woman, surnamed Wang, was enjoying a late dinner at the restaurant with some friends in Zhengzhou, Henan province, on March 18.

Her friends finished their meal and left first, but by the time she got up from the table a few minutes later, she was told the eatery was being locked down.

"If I had just left the place one minute earlier, I would have been able to leave," Ms Wang said, adding there were around 30 other guests caught in the same situation.

“It wasn't a completely terrible experience, though. The restaurant kept feeding us free food. At 3am, they made us noodles, and in the morning, they stir-fried some dishes. We could order anything we wanted for hotpot too — I ordered octopus, beef, and noodles.

“I ate until I couldn't move."

Her story went viral on China's social media platform Weibo, and commenters joked that a hotpot restaurant would be one of the better places to be quarantined.

Read Also
Singapore hospital warns against eating hotpot more than once a month, seafood and chicken broths among least healthy 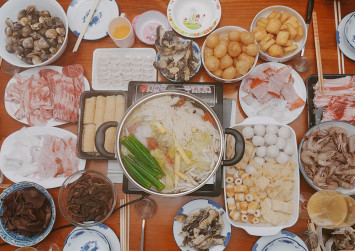 "If I had to be quarantined, I guess a hotpot restaurant is not so bad. Or maybe a public bathhouse," one Weibo user said.

When Ms Wang was finally allowed to leave the restaurant, she was advised to isolate at home for 13 days.

In January, Beijing locked down an entire office building after an Omicron case was detected there. Healthcare workers brought in blankets and pillows, and employees were forced to spend the night in their cubicles.