Students in China found that flora and fungi had taken over their empty hostels during their absence.

You've probably heard stories of wildlife flourishing in the empty cities during the Covid-19 lockdowns — jellyfish in the Venice canals, endangered sea turtles laying eggs on India's beaches, our very own Bukit Timah white horse galloping on the road, and so on.

Well, it turns out that the faunae were not the only ones basking in their freedom.

After lockdown measures were eased in China, students returned to their hostels, astonished to find that flora and fungi had thrived in their absence.

The hashtag, which translates to 'Weeds have started growing in our hostels', trended on Weibo yesterday (May 14) as students shared various photos of the wonders of nature thriving in their respective rooms.

People normally would not take kindly to unexpected plants invading their living area, but in this case, everyone seemed to love them.

In fact, many Weibo users have said that the students should just keep the plants there and allow them to become permanent fixtures in their hostels since they were rather aesthetically pleasing.

One particular plant even one-upped the rest by growing flowers! 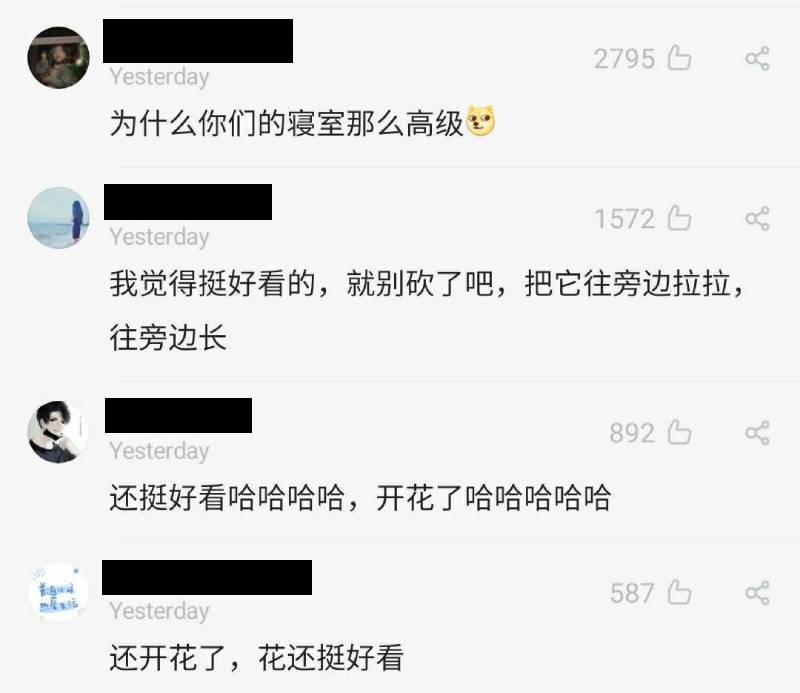 An amused Weibo user asked "Why is your hostel room so classy?" while others said that the plant looked good. PHOTO: Weibo

One Weibo user mused that the student would not have to go far to find a nice backdrop for her photos as the plant in her room was pretty enough to serve that purpose.

"This looks great, you have a new backdrop for photos now." PHOTO: Weibo

Apart from the greenery, some also found fungi peeking out from random places such as the mop in their hostel. "Remove them and have a taste," a Weibo user commented cheekily. "Don't waste it."

Meanwhile, one particularly lucky person seemed to have been blessed with a money pot in the form of a mulberry tree growing against her wall.

She was bombarded with comments telling her to seize the opportunity to breed silkworms (which feed on mulberry leaves). Who would've thought that someone could get rich off of a plant growing in her hostel?

While some people have expressed doubt over the authenticity of the photos, most are charmed and amazed by the plants' ability to grow under such conditions.

"As someone who is unable to keep anything alive, I am utterly speechless," one user commented.