HONG KONG - A Tesla Inc electric car caught fire in a parking lot in a Hong Kong shopping mall, the Apple Daily newspaper said on Tuesday, but no one was injured in the blaze, whose cause was not immediately known.

The electric car burst into flames 30 minutes after being parked in the city's San Po Kong district on Sunday, the newspaper said, with three explosions seen on CCTV footage.

The vehicle was a Tesla Model S 85 KWH dual power version, added the paper, which gave no explanation of what might have caused the blaze. 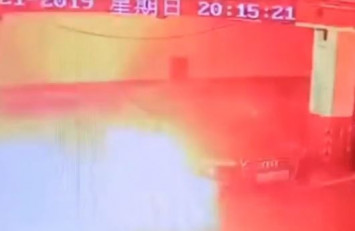 Responding to a request from Reuters, Tesla declined to comment. Reuters was not able to contact the vehicle owner or obtain CCTV footage of the incident.

Hong Kong's fire services department told Reuters a vehicle caught fire on Sunday, but gave no details, such as the make of the car. Authorities are investigating the cause.

The incident comes three weeks after Tesla said it had sent a team to investigate a video on Chinese social media that showed a parked Tesla Model S car exploding in the commercial hub of Shanghai.

The automaker has said its EVs are about 10 times less likely to experience a fire than petrol-powered cars.

There have been at least 14 instances of Tesla cars catching fire since 2013, most of them after a crash.