A woman walks with an umbrella amid rain and wind brought by Typhoon Muifa, in Shanghai, China, on Sept 14, 2022.

BEIJING - Powerful gales and torrential rains battered Zhoushan in eastern China on Wednesday (Sept 14) as Typhoon Muifa made landfall at the port city in what local media called the strongest tropical cyclone to hit the populous Yangtze River Delta in a decade.

Muifa landed around 8:30pm (1230 GMT) as a strong typhoon, the second-highest in China's tropical cyclone classification system, with the maximum wind speed near its centre reaching 42 metres per second, according to state weather forecasters.

That's equal to 151 km per hour (94 miles per hour), powerful enough to damage homes, topple trees and down power lines.

Muifa is expected to spin across Hangzhou Bay to make its second landfall around midnight near Shanghai, before continuing its northerly track to the provinces of Jiangsu and Shandong, state weather forecasters said.

Earlier on Wednesday, China raised its highest tropical cyclone alert as Muifa approached the Yangtze River Delta, a dense cluster of big cities with a total population of more than 230 million.

The Yangtze Delta is also China's most prosperous region, with Shanghai the nation's financial and commercial capital and neighbouring cities important centres of industry. The Ningbo-Zhoushan port and port of Shanghai are among the busiest in the world by cargo tonnage handled.

Flights at Zhoushan and Ningbo airports, in the coastal province of Zhejiang, were cancelled, while the ship bunkering hub shared by both cities suspended discharging and loading oil as tankers took shelter at anchorages.

All flights at Shanghai's busy Pudong and Hongqiao airports were cancelled as a precaution.

The mega city of 25 million people took safety measures a step further by limiting speeds for ground elevated trains or even closing stations, and warned of train delays to ensure safety in affected areas while keeping other sections operating. 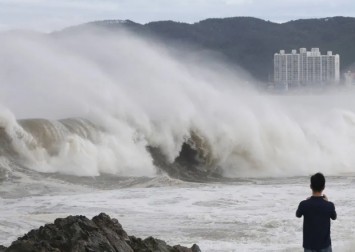 Shanghai's numerous outdoor Covid-19 testing sites were also shut, in a rare disruption to an entrenched testing regime since a citywide lockdown was lifted in June.

More than 1.14 million people in Zhejiang had been relocated ahead of the storm, according to local media.

Muifa was the strongest typhoon in the Yangtze River Delta in a decade. Meteorologists said it was caused by this year's unusually hot weather and high temperatures in the East China Sea, Chinese financial magazine Caixin reported.

In 2012, Typhoon Damrey made landfall in Jiangsu province north of the Yangtze River, the strongest tropical cyclone to batter the Yangtze River Delta since 1949, killing dozens in its path, destroying tens of thousands of homes and causing billions of yuan in direct economic losses.