HONG KONG - With thousands of people locked down in tiny apartments, government quarantine centres filling up and many businesses shuttered, Hong Kong is scrambling to sustain a zero-Covid policy that has turned one of the world's most densely packed cities into one of the most isolated.

The economic and psychological tolls from the global financial hub's hardline approach - in line with China's strategy - are rapidly rising, residents say, with measures becoming more draconian than those first implemented in 2020.

Flights out of Hong Kong's international airport are down around 90 per cent, over 8,000 people are locked down in government quarantine facilities and a congested housing block, while 900,000 students have been shut out of schools since the start of this week.

Once one of the world's most connected places, Hong Kong is reeling from the closure of its borders, impacting the free flow of people and the availability of food and foreign products the city is so highly dependent on.

Besides schools, authorities in the city of 7.5 million have shut down playgrounds, gyms and most other venues, while tens of thousands of people are required to do daily coronavirus tests.

Restaurants and bars close at 6pm.

Over 2,000 hamsters and other animals have been culled to stop transmissions as community cases surge.

Dr Siddharth Sridhar, clinical assistant professor at the University of Hong Kong's Department of Microbiology, said "a very practical adjustment in terms of our containment strategy" was needed.

"This is not sustainable," he said. "Eventually we are going to see a very local protracted outbreak, likely to be worse than previous cases."

While Hong Kong succeeded in keeping the virus under control for much of 2021, there have been over 600 locally transmitted infections in January so far, compared with just two in December, as the highly transmissible Omicron variant spread.

"Essentially it's playing whack-a-mole. It (coronavirus) will simply keep coming back," said Professor Keith Neal of the University of Nottingham in the United Kingdom, referring to the popular amusement arcade game.

Shutting itself off is an "unworkable strategy" for Hong Kong, said Professor Sumit Agarwal of the National University of Singapore's Business School, as the economic and social costs of the policy continue to soar.

"Only Hong Kong and China are saying they are trying to eradicate the virus," he said. "It would have worked if other countries did the same, but the fact they don't think that way means the virus is always flowing."

Leader Carrie Lam has said Hong Kong cannot live with the virus as many major cities are doing.

She says over 80 per cent of the city's elderly are unvaccinated, and a large outbreak of infections will heavily increase the burden on already stretched healthcare services. 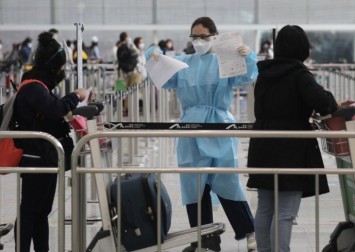 Increasing Hong Kong's vaccination rate is key, she said, with just over 70 per cent of the people double vaccinated and around 10 per cent having received a booster or third shot.

Ms Lam said on Thursday that Hong Kong will shorten its 21-day quarantine requirement to 14 days for incoming travellers starting from Feb 5, after months of pressure from financial executives and foreign diplomats who said the rule was eroding the city's competitiveness.

Many professionals and expatriates are leaving or planning to leave the former British colony, seeing no end in sight to the restrictions.

Quarantine rules for those infected as well as close contacts is curbing the city's desirability and risks an exodus, according to an internal report by the city's European Chamber of Commerce.

Companies are repositioning their staff to Singapore and Seoul, it said.

Hong Kong authorities hold daily briefings, providing details on each infected person, where they live, where they ate and where they went.

Credit card statements, transport records, CCTV footage and a government app are some of the methods they use to identify and quarantine close contacts.

"The Omicron variant is so explosive in its spread that it will be the sorest test of Hong Kong's response yet if it keeps up testing, tracing, isolation and quarantine," said Associate Professor Alex Cook of the National University of Singapore's Saw Swee Hock School of Public Health.

"Once the number of cases for contact tracing becomes too high... more secondary cases will slip through and the epidemic growth would be compounded."