The first major announcement is New Pokémon Snap for the Nintendo Switch. The original game, released back in 1999 for the Nintendo64, transformed players from Pokémon Trainer to Pokémon pro photographer.

The aim was to snap pictures of Pokémon in their natural habitat - think National Geographic meets Pokémon.

Fast forward to 2020, New Pokémon Snap has the same goal, but features high-res graphics of Pokémon just doing their thing (which I feel looks more chio than Pokémon Sword and Shield). The game promises jungles, swamps and islands to explore.

Not much else is known - nevertheless I’m dropping a pre-order the moment it becomes available.

No news when New Pokémon Snap releases, but we’ll update this piece when that’s announced.

Craving for some cafe-hopping with friends but restricted by the 5 pax limit? With Pokemon Cafe Mix, you can do so without worrying about breaching #SocialDistancing guidelines! In this mobile game (also available for the Nintendo Switch), you’re a café proprietor whose main customers are… Pokémon!

To become the Gordon Ramsey of the Pokémon world, you’ll need to “cook” by completing a touch-based puzzle reminiscent of Disney Tsum Tsum.

The key difference is players have to connect the Pokémon icons by swirling them around, sort of like mixing a batch of ingredients in the kitchen (If you’re confused about what this means, the video above provides a great demonstration).

Of course, you’re not alone – you have cute Pokémon staff that can join and help you “run” the café. Each Pokémon has its own unique skills to help you complete the puzzles and become the next Pokémon Masterchef.

I already have Charmander as part of my staff and I’m hoping to add Minccino and Slurpuff soon.

The game is free-to-download with in-app purchases. You can start playing Pokémon Café Mix now for the Nintendo Switch, iOS and Android.

Available at the Apple App Store and Google Play Store.

It’s similar to your usual five-on-five team battle games but with the addition of typical Pokémon game elements such as leveling up and evolving while trying to defeat the opposing team’s Pokémon. The team with the highest score at the end of the match wins.

Plus, players will be able to play against each other whetherthey’re on the Nintendo Switch or on a mobile device.

So far, the video above confirms these few fan favourites: Pikachu, Charizard, Blastoise, Machamp, Snorlax, Gengar, Talonflame, Clefable, Bewear, and Lucario, along with their pre-evolution forms.

For a game called Pokémon Unite, the game’s announcement is already dividing opinions among Pokémon fans – those who are looking forward to Pokémon Unite and on the other hand, others who were disappointed that Pokémon kept fans in suspense, only to announce a free-to-play mobile game.

No release date for Pokémon Unite was announced, but we’ll update this space as soon as we know.

Having trouble getting your little ones to brush their teeth? Maybe this Pokémon AR game will help. In Pokémon Smile, players brush their teeth to save Pokémon from cavity causing bacteria (of course, we #dontjudge if you want to play the game too).

Your kids get to “wear” Pokémon hats like an Instagram filter, and the Pokémons are drawn in a cute art style that’s simply adorable. Fingers crossed for plushies coming soon to Pokémon Center Singapore? 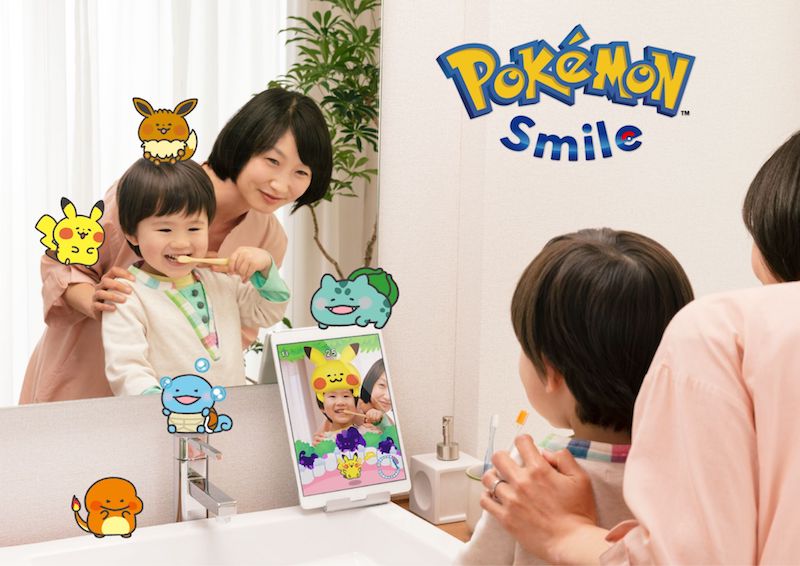 Full disclosure: I shamelessly gave it a go but found that it was hard for the game to detect my semi-transparent toothbrush (or perhaps my mouth was covered in too much foam). At the end of my session, I couldn’t catch the Pokémon either, much to my frustration.

When you’re done, the game shows you four (humiliating) photos of you brushing your teeth – just in case you want to show that off on Instagram.

Pokémon Smile is already available on both the Apple App Store and Google Play Store.