Is the sale of Samsung's Galaxy Note 20 smartphones imminent? A guess like this can be a stretch, but IMDA's device registration page suggests that the next Samsung flagship phones could be available in Singapore sooner than we think.

IMDA's Equipment Search list is a registration repository for telecommunication products licensed for sale in Singapore. In short, gadgets and devices registered on the IMDA portal can expect an appearance here, soon. 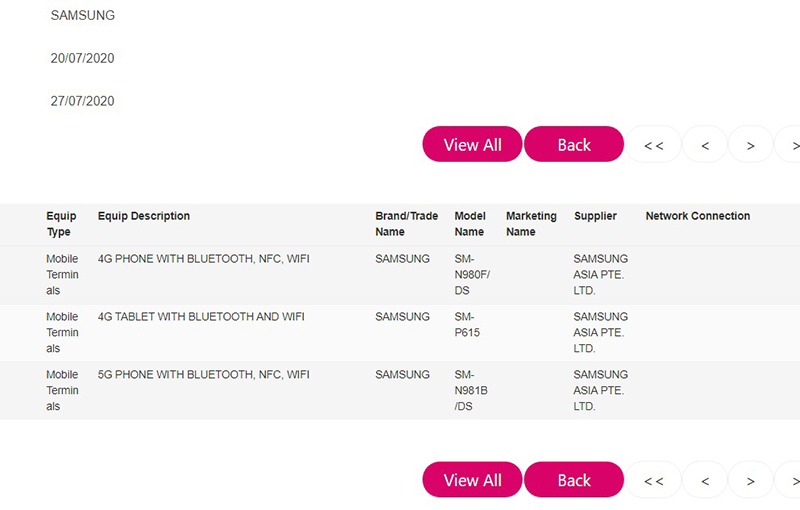 Two Samsung devices of interest surfaced on the portal last week, bearing the serial numbers SM-N980F/DS and SM-N981B/DS. The accompanying tags stated that they are 4G and 5G phones, respectively.

A quick Internet search will tell you ( thanks GimzoChina ) that these are the model numbers for the Samsung Galaxy Note 20 4G and 5G variants.

Bearing in mind that August 5, 2020 10PM (SGT) is when the Galaxy Unpacked livestream goes on, it could very well mean that the Galaxy Note 20 phones might be available in Singapore as early as mid- or end-August.

If you're interested, here's what we know so far about Samsung's Galaxy Note 20 phones.

Among the new IMDA listing was the model number for the Galaxy Tab S6 Lite, too. The 'SM-P615' device first appeared on the Geekbench benchmarking tool alongside with its Exynos 9611 chipset in the system's information box.

The IMDA listing further specified that SM-P615 is a tablet. Subsequently, the Galaxy Tab S6 Lite was the only tablet featured on the official webpage of Exynos 9611 . It's a pretty odd listing, since we're all waiting on the Galaxy Tab S7 and S7+ instead .