Acer Vero started off as a laptop and expanded into a series that was designed around the concept of eco-sustainability.

While there's plenty of debate about whether or not recycling plastic is actually viable, we can't deny that improving visibility is necessary to give more weight to public discourse and make steps towards more viable solutions.

While little is known about the internals of the Vero – I suppose that could be the next phase for the whole recycling lark –whatever we can see on the outside are mostly accounted for by their use of recycled plastics and paper.

The box itself can be converted into a bigger storage box, which is a nice way to recycle something that often gets thrown out.

The laptop chassis will undoubtedly be the focal point for a lot of questions.

Made from 30 per cent post-consumer recycled (PCR) plastics, the chassis has the look that's not too different from some recycled paper napkins with its repeating indented texture and mottled aesthetics.

Acer calls the colour cobblestone grey and I can see why – it's a pretty nice, chic shade of grey though it can look slightly brownish in certain lighting conditions. Therein lies the charm, I suppose.

It feels inoffensive in the hands and as far as I'm concerned it feels no worse than regular plastics. In any case, the textured case actually feels better for handling.

The Vero weighs about 1.5kg, which isn't exactly light but neither is it heavy. Coupled with its evenly distributed weight, the laptop is pretty pleasant to handle.

The Acer logo is engraved into the shell and uncoloured, which is great, but logos for Intel Evo and PCR are engraved unabashedly onto the palm rest, which is not as great, but I guess the genius bit is you don't really notice them much of the time.

The only form of colour: Yellow rubber feet and the legends on the E and R keys. The letter R is flipped stylistically as well, so people with OCD, please look away now.

Overall, the aesthetics are quite pleasant and the novelty of recycled materials certainly adds to the charm-kind of like if Apple made their MacBooks now from plastic.

While the idea of a laptop that has recycled plastics sounds like there is some sort of compromise somewhere, the Vero generally seems like a normal laptop for all intents and purposes.

The colour gamut of the display looks pretty normal (thankfully not a cheaper, anaemic-looking panel) and the brightness seems pretty modest. Bear in mind that it's not really that good in bright sunlight; which is unfortunate, because it has a matte display that's more conducive for viewing in any lighting conditions. 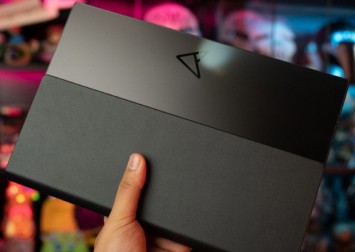 Speakers are generally not Acer's strong point and the Vero is actually OK in this regard. They can be pretty loud and yet offer a decent degree of clarity, albeit at the expense of bass. The speakers are downward firing though, so you actually need a hard surface for the sound waves to reflect optimally.

In our configuration, we have a 12th-gen Intel Core i7-1255U CPU with 16GB RAM and a 1TB drive, which is their highest configuration. Performance-wise, the Vero is pretty average; but for everyday use, it's just fine.

The battery is a more relevant concern and I managed to make it through most of a workday with the Vero. So while it isn't quite a monster in the battery longevity department, again, it is fairly adequate for general tasks like web browsing and working on reports and the like.

With USB-C charging, it's even more convenient to top up every now and then (any 65W fast charger is good). Heat dissipation is actually OK, the laptop doesn't get too hot and most of the heat is directed downwards so your keyboard only gets mildly warm.

Perhaps Acer would like to make the next iteration the most energy-efficient laptop on the market to be perfectly on-brand, but I suspect the added cost will scare off potential customers in droves. Damned if you do, damned if you don't, I guess.

The port layout is fairly basic-one. Thunderbolt 4 port, two USB-A v3.2 ports with one with power-off charging enabled, one HDMI port and a headphones jack. You can charge via an AC adapter or the USB-C port.

The Thunderbolt 4 itself lets you convert the port into a hub if you need the added connectivity. While it would be nice to have more, I think this covers what most average users need.

Another plus: The 1080p webcam isn't bad at all, and images look sharp so long you aren't sitting in a badly-lit place.

One plus point about Vero is that it's user serviceable. Understandably, any company line would dictate that the laptop should be serviced by qualified personnel only, but once the warranty is done, it's good to know that you don't need specialised tools to take the laptop apart just to upgrade the RAM or SSD, or even the battery if you can source it online.

Despite the Vero being something close to what you would call an experimental lineup, there are six variants alone with prices ranging from $1,298 for an Intel i5 model (1155G7) with 8GB RAM and 512GB storage to $1,698 for the configuration that we have.

With sale prices, it ranges from $798 to $1,498; which is OK since we have to factor in the "green tax"-using recycled materials often results in a more expensive product.

The salient point here is that green products come at a cost, be it through compromised performance (think slow speeds of power-efficient hard drives) or higher price, and the fact that the Vero doesn't fare badly in either department is perhaps the best compliment you can give for an endeavour like this.

The Vero is in reality, quite a pleasant laptop to use, in an I-don't-mind-jumping-on-green-bandwagon kind of way, so kudos for that.

There's plenty to like about the Vero; if anything, it's a refreshing change of pace if you're bored of your usual run-of-the-mill laptops.