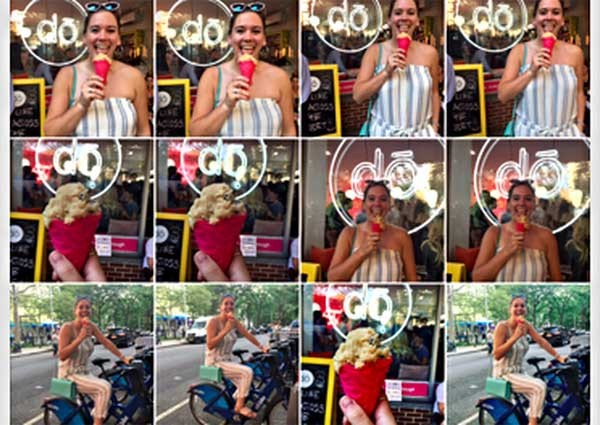 Let's be real – most of our camera rolls are chock full with nearly identical photos.
Mashable

It's a rare occasion when you take the perfect photo on the first try.

Most likely, your camera roll is clogged with photos as you attempt to shoot that all-star selfie, picture at the concert, or snapshot of the new glow-in-the-dark donuts.

But for all you accidental photo hoarders, photography app EyeEm and its AI helper are here to remove your pre-post photo clutter.

The app rolled out an update on Wednesday, giving users the ability to choose which photos will be the most liked.

The new feature is called EyeEm "Selects," and it's an AI curator that automatically selects the best shots on your camera roll based on learned algorithms.

The app is actually a place where anyone can sell their photos.

And while not everyone is trying to select the perfect photo to sell, it's still a super useful way to figure out which photos you should delete and which ones you should post.

After all, if EyeEm thinks that one photo is going to sell better than the others, it probably also means that's the photo you should post on social media, too.

EyeEm's Vision technology works so well because it learned to appreciate aesthetics from expert researchers and photo curators.

That means when suggesting photos to post, it doesn't focus solely on technical features, like if the rule of thirds was followed.

To train Selects, developers gave the feature a test set of millions of photos already on EyeEm to learn with.

Photo editors sorted through them to identify which ones were "good."

This taught the AI assistant how to choose the photos that have the most significance and tell the best story, and not just the photos with the good quality and composition.