Some tech media like to poke fun at companies offering incremental upgrades of their premium hardware each year and for all intents and purposes, the Apple Watch series fits the criteria of devices that don't seem to offer discernable improvements… until you hold the two devices side by side.

On the surface, the larger screen on the new Apple Watch Series 7 looks and feels the same as its predecessor, and the slightly larger dimensions, of 1mm, isn't exactly groundbreaking.

But when you look at the new 45mm (versus the 40mm and 44mm from Series 6) of the Series 7, there something different in the smaller bezels and curved display that offers a 20 per cent larger screen overall, without making the device physically bigger.

This is achieved by having the borders around the frame 40 per cent smaller, and when held up against older Watch series, especially the Watch Series 5, the difference is so apparent that you start to notice the unused space on older Watch models.

The smaller bezels mean the watch face and interface runs almost to the edge, giving you plenty of real estate to play with.

For one thing, it allows you to control the font size of text with greater precision, and you can read emails and messages more smoothly, as there is more text on display to form fuller sentences.

If you hate typing on Apple Watch, the larger real estate isn't going to change your mind, because a watch display can only get that big, but it is easier to type out shorter responses on the go.

According to Apple, the Retina OLED screen is 70 per cent brighter than its predecessors, and they're not kidding, as the new display is absolutely gorgeous and clear even when viewed outdoors, under the hot sun.

Indoors, the always-on mode is brighter too, in fact, such that it's actually a bit too bright when you're lying in bed, which distracted the wife a bit when she was woken up in the middle of the night, after having my watch face shining in her face. Oops.

To cater to the larger screen, Apple has introduced four new watch faces - Contour, Portraits, Modular Duo, and World Time, and the first two are now personal favourites, and this is coming from someone who actively uses Clockology to showcase more watch faces.

Contour shows off the nice size of the new screen, with the 12 numbers of a clock now running along the circumference of the watch face.

Portraits is something that is a long time coming, allowing users to pick up to 24 portrait photos on your phone that auto rotates each time you raise your wrist to see the time. 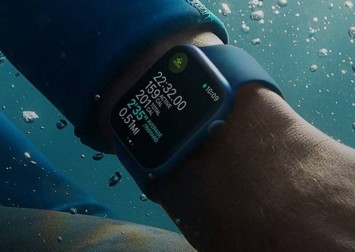 As the photos are taken in portrait mode, the app cleverly (and automatically) places the time display partially behind the subject's head, depending on the photo's composition. It's rather well done and quite intuitive in presentation.

As with electronics, protection is the name of the game and this is the first smartwatch on the market with IP6X dust resistance, coupled with a 50 per cent thicker (than the Series 6) crystal front screen that gives users greater peace of mind from knocks and scratches.

In fact, you can actually forgo buying a screen protector for the Series 7. The watch's water resistance remains the same, at up to 50 metres.

The new aluminium finish is gorgeous, delivering a nice matt finish, giving it a very premium look, and probably hardier from scratches.

Our review model is the green version, a first for Apple Watch, and in reality, it comes out more polished than expected.

A casual glance makes it look more black, until you capture the light reflections off the metal finish, to see the dark green accents on display.

Battery wise, the 18 hours here is identical to that of the Series 6, though Series 7 now offers a fast charging option built into the device, and the new charging unit that powers up the phone 33 per cent faster than Series 6.

For those looking to upgrade their Apple Watch for health reasons, Apple has also introduced two new health-related functions - an improved ECG heart sensor app, as well as a Blood Oxygen app that helps measure your blood oxygen levels on the fly.

This is particularly handy during the Covid-19 pandemic, and as long as your oxygen level remains between 95 per cent to 100 per cent, you're good and won't need to seek medical attention.

Is the Apple Watch Series 7 worth an upgrade?

In these times of maintaining one's health, it's imperative that we take responsibility of our body and Apple's Watch remains one of the better devices out there to invest in peace of mind.

The only downside at the moment is for Clockology app users who love updating their watch faces with those designed by the community - all existing clock faces will need to be updated and reworked to fit the new, slightly larger screen size, so you have to wait a bit to tap onto that larger real estate.

The good news is that the current Clockology app works perfectly with iOS 15.1 and the latest WatchOS 8.1.

The changes are ever so small, but the Apple Watch Series 7 brings around improvements, from faster charging, a larger display and a new "Portraits" face, to make it the best smartwatch in the market, with no peer in sight.