The Asus ROG Flow X16 is the third addition to the Flow family of two-in-one gaming notebooks.

When you think of gaming machines, you don't typically think of two-in-one notebooks. But that's not to say they don't exist; indeed, Asus is no stranger to the gaming convertible notebook, with its ROG Flow X13 and Z13 (which we reviewed earlier this year here) filling that niche.

But there hasn't been a larger gaming convertible option within Asus ROG's selection of gaming notebooks, until now. Meet the ROG Flow X16.

The ROG Flow X16 is the third notebook to join the Flow family of convertible two-in-ones, and currently the one with the largest screen size, featuring a 16-inch display.

While it's not the fastest out there, it strikes a nice compromise between speed and looks. Asus also touts a peak brightness of 1,100 nits of brightness, Vesa DisplayHDR 1000 certification, and owing to its two-in-one nature, touch sensitivity, all with a 360° hinge.

While the two GPUs aren't exactly the most powerful mobile graphics processors on the market, considering the form factor of the Flow X16, any more might be pushing it.

If you do need more graphics power, though, the Flow X16 is compatible with Asus ROG's line of external XG Mobile GPUs, through an XG Mobile interface on the left side of the notebook.

And this may come as a pleasant surprise, but it should be noted that the RTX 3060 option does also come with an XG Mobile external GPU in the box, which features an AMD Radeon 6850M XT. 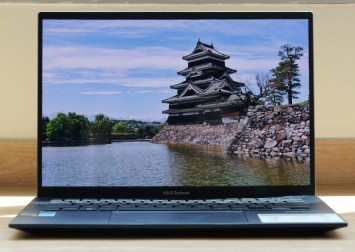 Speaking of pushing it, though, if you do find a need to push the Flow X16 closer to its limits, some new cooling methods by Asus on the notebook should help.

A third fan meant for the GPU pushes heat to what Asus calls its Pulsar Heatsink, which is a high-density heatsink covering a 110,902 mm² surface area.

Topping the cooling tech off is some unspecified Thermal Grizzly liquid metal (though possibly Conductonaut from the sounds of it) on the CPU.

If you're interested in seeing what else this convertible machine can pack, these are some of the key specs for the two Flow X16 options available:

As the table above suggests, the Flow X16 is non-configurable, so if you do plan on getting it, you'll have to choose between the $3,998 base option or the $6,298 option with an RTX 3060, with the latter presumably being much more expensive due to the inclusion of an XG Mobile discrete GPU.