Australian billionaire to back $18.7 billion solar power supply to Singapore

Atlassian Corp PLC co-founder Mike Cannon-Brookes has pledged to help fund an A$20 billion (S$18.7 billion) project to supply solar power from northern Australia to Singapore by a subsea cable, an Australian newspaper reported on Wednesday.

The plan unveiled earlier this year by Singapore firm Sun Cable is to build the world's largest solar farm in Tennant Creek in the Northern Territory, which could export 3 gigawatts of power via a 3,800 km cable to Singapore.

Cannon-Brookes did not specify how much of the "insane" project his family fund, Grok, planned to finance but said he was being joined by other Australian entrepreneurs and an announcement was likely before the end of the year.

"I'm backing it, we're going to make it work, I'm going to build a wire," the Australian Financial Review (AFR) quoted Cannon-Brookes saying in an interview on the sidelines of the United Nations Climate Action Summit in New York. 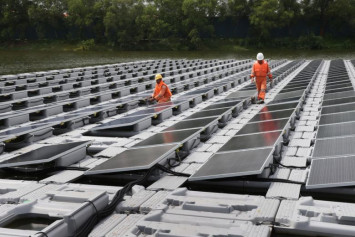 Sun Cable has not detailed its funding plans for the project.

"Unfortunately we are not ready to discuss further details regarding our capital raise," Chief Executive David Griffin said in an emailed response to Reuters on Wednesday.

Cannon-Brookes said on Twitter from New York that Australia's Prime Minister Scott Morrison, a coal supporter, should do more to promote renewables.

"We should be a renewable energy superpower," he tweeted.

On that, Australia has massive opportunities here! We should be a renewable energy superpower.

We can generate huge numbers of jobs. We have exporting DNA. We've crushed giant engineering challenges as a nation. We've done this before. I believe our government _can_ think big.

The project, which has been given major project status by the Northern Territory to help fast-track approvals, would include battery storage. It is due to start producing power from late 2027.

Cannon-Brookes, who has been a vocal advocate for renewable energy in Australia, said the project could also expand to produce hydrogen fuel, which could be exported to markets such as Japan.

"This will be absolutely great - with world-leading engineering required all up and down. But we can do it," he was quoted saying in the AFR.

Cannon-Brookes, 39, became a billionaire through his stake in the software firm Atlassian, which he co-founded with Scott Farquhar.

He made his name in the power sector in 2016 when he challenged Tesla Inc's Elon Musk via Twitter to build the world's biggest battery in 100 days to help prevent blackouts in South Australia, the country's most wind power reliant state.

legend! ☀️ You’re on mate. Give me 7 days to try sort out politics & funding. DM me a quote for approx 100MW cost - mates rates!

The bet was dismissed as outrageous at the time, but Tesla built the battery on time and the project has since proven to be profitable in helping manage power supply on South Australia's shaky grid.

With solar panel prices rapidly falling, Sun Cable's main technical and cost hurdles will be the undersea transmission cable, said an energy consultant who will be highlighting the project at a solar power conference in Salt Lake City this week.

"Can you see the determining factors evolving in such a way in the next five years to make this project possible? Absolutely," said Gero Farruggio, managing director of Rystad Energy, by phone from Salt Lake City.

Given the scale and challenges of the project and its potential to compete with liquefied natural gas supply, Farruggio predicted the project would eventually attract an oil and gas player, especially if it involves producing hydrogen.