Bishan-Ang Mo Kio Park’s state-of-the-art protector of safe distancing has made big enough waves overseas to get featured in a late-night talk show in the US, and it’s not for its adorability.

Like everyone else on the internet, comedian Stephen Colbert couldn’t resist pointing out the resemblance between our own robotic public-health ambassador and a certain dystopian murder-machine from a Black Mirror episode. 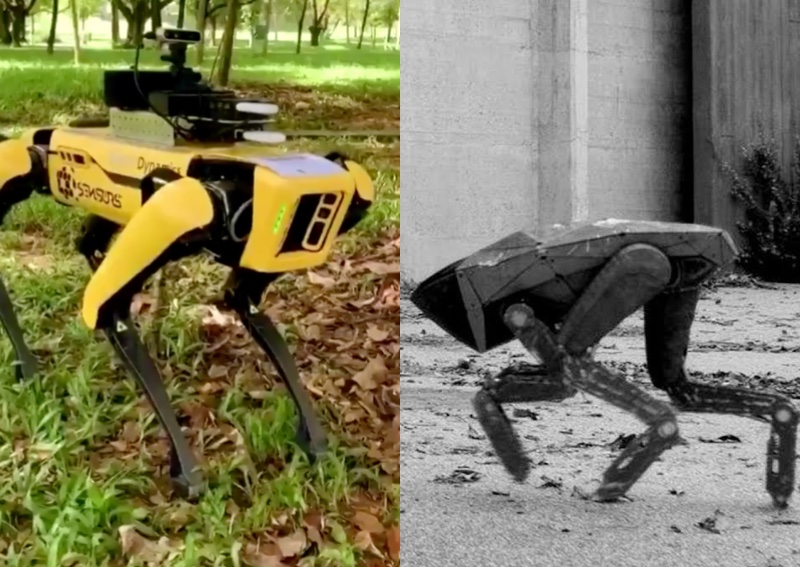 The remote-controlled, four-legged machine built by robotics company Boston Dynamics has been deployed to patrol the park since last Friday (May 8) in a trial run launched by the Singapore government.

Instead of being tasked to hunt down humans, this version of the robo-dog is a polite girl, reminding people to stand at least a metre apart from each other in a pre-recorded female voice.

Friends of mine saw this today in Bishan Park while they were out for exercise - a cool example of advancing technologies to support us in day to day life - pic.twitter.com/MEBFYjHIHP

This surreal, futuristic scenario caught the attention of Colbert, enough for the talk-show host — who’s also stuck at home — to do a shoutout to Singapore’s robo-dog in his opening segment.

“I’m sure the real robo-dog looks and feels absolutely nothing like that robot whatsoever,” the man remarked after jokingly screening a scene from the Black Mirror episode Metalhead.

“…and, we’re all gonna die,” he said after showing footage by The Straits Times of the robo-dog in action. “At least this one’s a jaunty yellow! I gotta say, people would be a lot more receptive if the dog was cuter, cuddlier and less dystopian.”

Despite its polite niceties, the Boston Dynamics quadruped companion is very much capable of being more than just a social distancing snitch. Armed with 360-degree vision and the ability to nimbly go wherever wheeled robots cannot, Spot can open doors by itself, traverse rough terrain, carry payloads of up to 14kg, and pick itself up after falling.

You know you’re living in the future when there are actual slick commercials for robots.

If the two-week trial is successful in reducing the need for human staff to patrol the grounds, the National Parks Board could consider deploying the robot elsewhere in the country. Spot’s not even Singapore’s first autonomous safe-distancing ambassador either — the Public Utilities Board have been using a cute four-wheeled robot for surveillance and broadcasting messages in various languages at Bedok Reservoir.