A wildlife rescuer with a koala rescued at a burning forest near Cape Borda on Kangaroo Island, southwest of Adelaide, Australia.

Tiger burns in Australia's bushfires? It's a 2012 photo from Indonesia.

Social media is packed with powerful images of Australia's bushfires - but many are fake.

Here is a selection of recent fact checks on the deadly blazes: 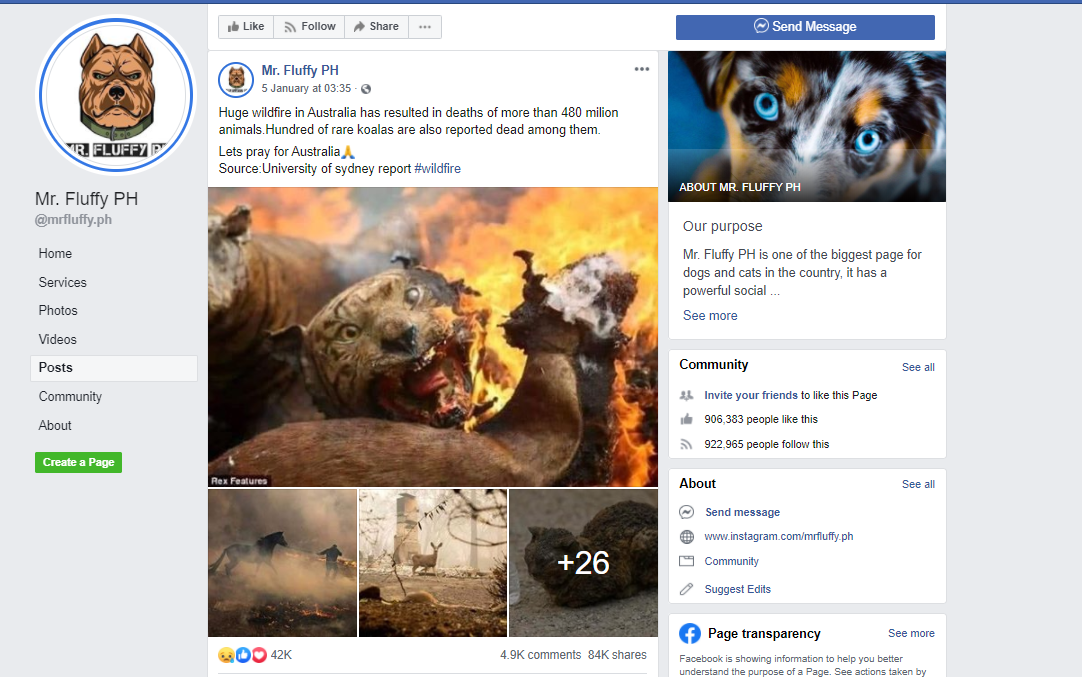 PHOTO: Screengrab from Facebook/mrfluffy.ph via AFP

A graphic photo that appears to show a tiger being devoured by flames has been shared tens of thousands of times in Facebook posts decrying the deaths of millions of animals in deadly Australian bushfires.

Some estimates do indeed put the death toll from the blazes at nearly half a billion animals. But the image is actually a 2012 photograph of a taxidermied tiger that was burned by Indonesian authorities during a crackdown on wildlife smuggling. 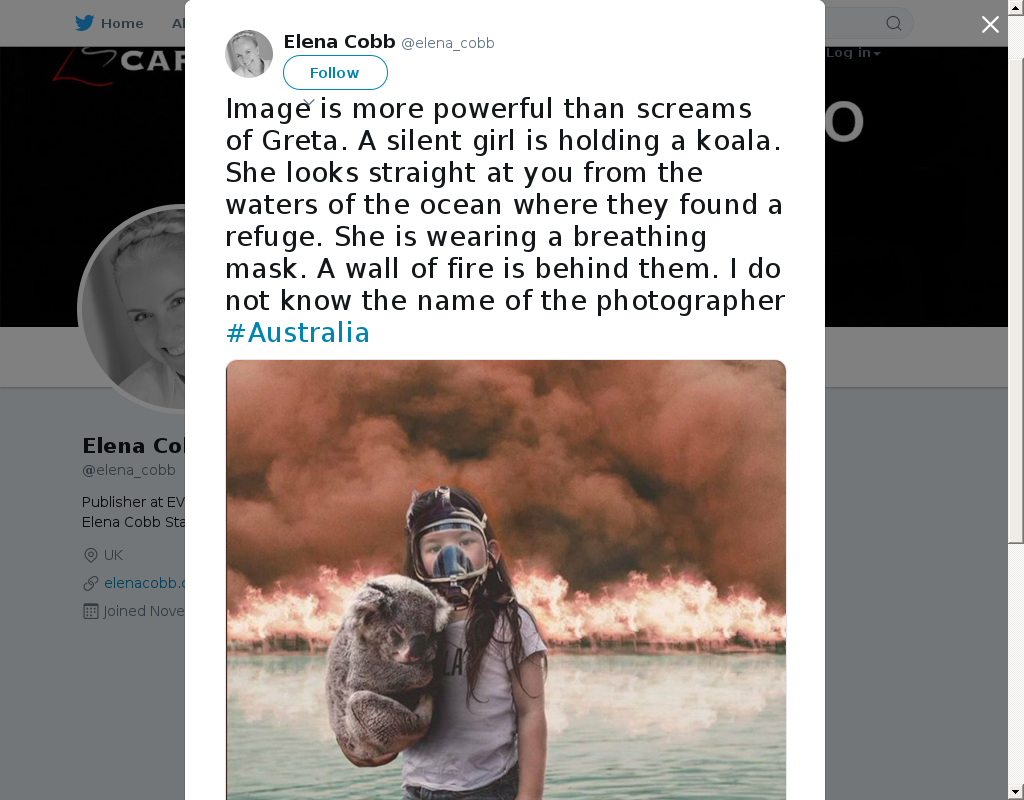 PHOTO: Screengrab from Twitter/elena_cobb via AFP

An image of a young girl in a gas mask clutching a koala in front of a giant wall of flames and smoke has been shared tens of thousands of times in Instagram and Facebook posts that claim it is a real photograph. But the image was actually created by artist Thuie.

"My work was intended to represent what we are going through right now, the fires, the people affected by these fires and the masks that those who live in endangered areas must wear, and the fact that animals are as affected as humans," the artist told AFP. The image was created primarily from a photo of her daughter standing in water, she added. 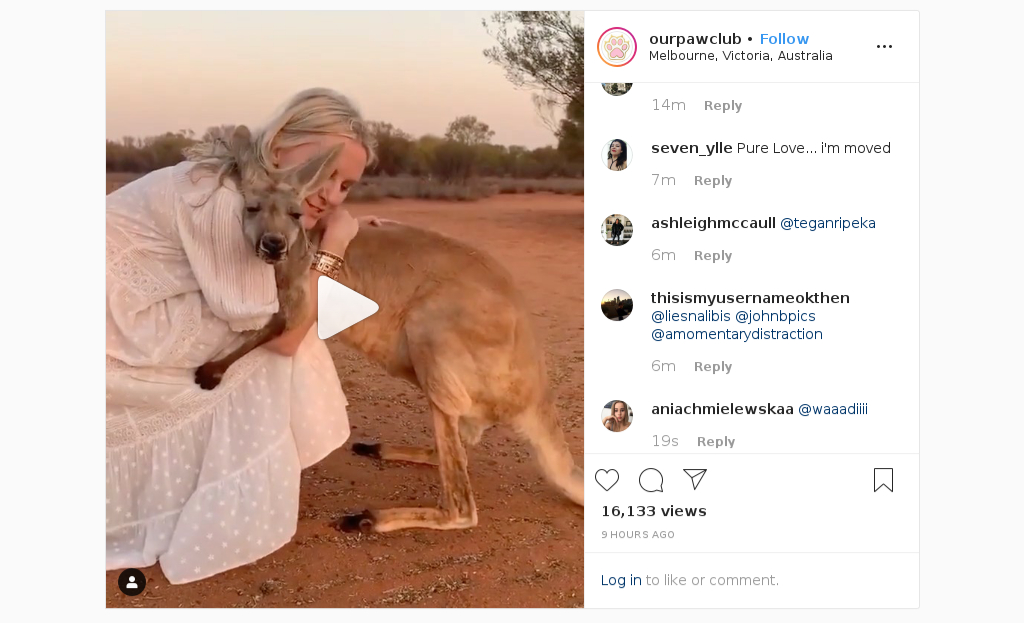 PHOTO: Screengrab from Instagram/ourpawclub via AFP

Two viral videos showing women cuddling a kangaroo have been viewed tens of thousands of times in social media posts that claim they show the aftermath of a bushfire animal rescue.

"The kangaroo is so grateful that (it) just can't stop hugging the person who saved its life!" the posts claim. But the claim is false: the videos were actually filmed at a kangaroo sanctuary located in Australia's Northern Territory, which has not been affected by bushfires.

The sanctuary, which has more than one million followers on Instagram and regularly posts pictures and videos of their rescue animals, told AFP that both videos show Abigail, a kangaroo who has lived at the sanctuary since being rescued as a joey in 2006. "We don't have fires here thankfully," the sanctuary told AFP in an email on January 7, 2020. 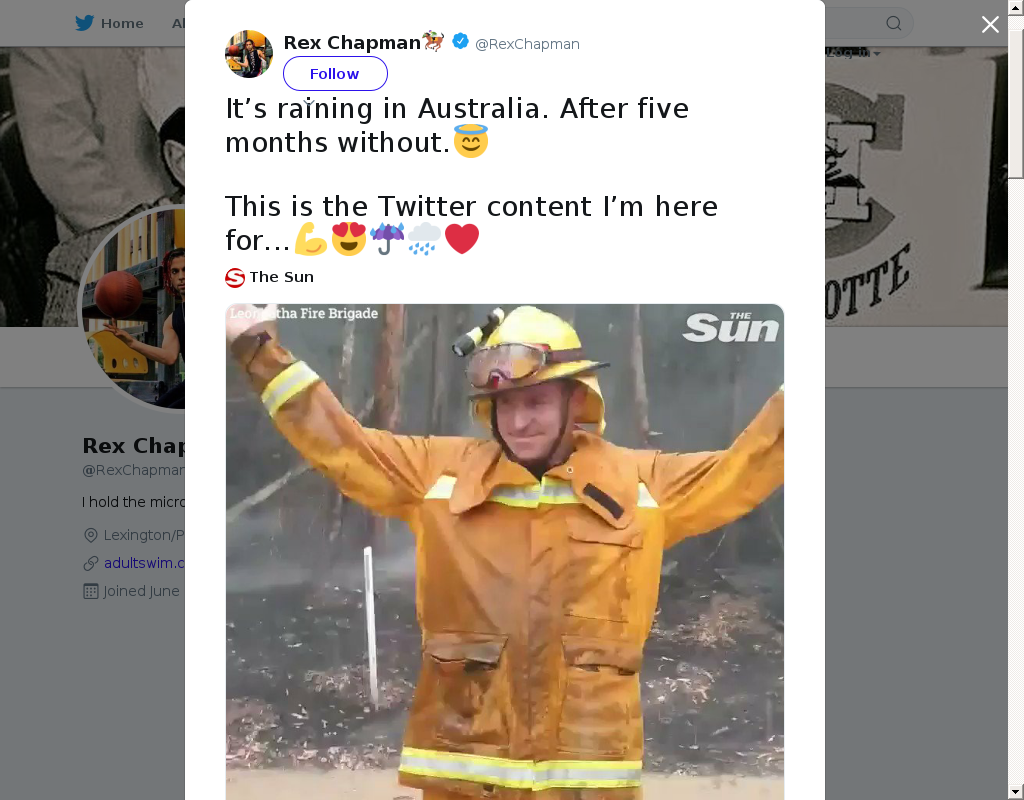 PHOTO: Screengrab from Twitter/RexChapman via AFP

A video of Australian firefighters celebrating in the rain was viewed millions of times online after being tweeted by British newspaper The Sun on Jan 6, 2020.

The footage has been shared on Facebook in multiple languages including Spanish and Sinhala, with many users claiming it was shot in January 2020 and shows new rain bringing relief to weary Australian firefighters. But the video is being shared in a misleading context: it was actually filmed in November 2019, according to the fire brigade who originally posted the footage on Facebook. 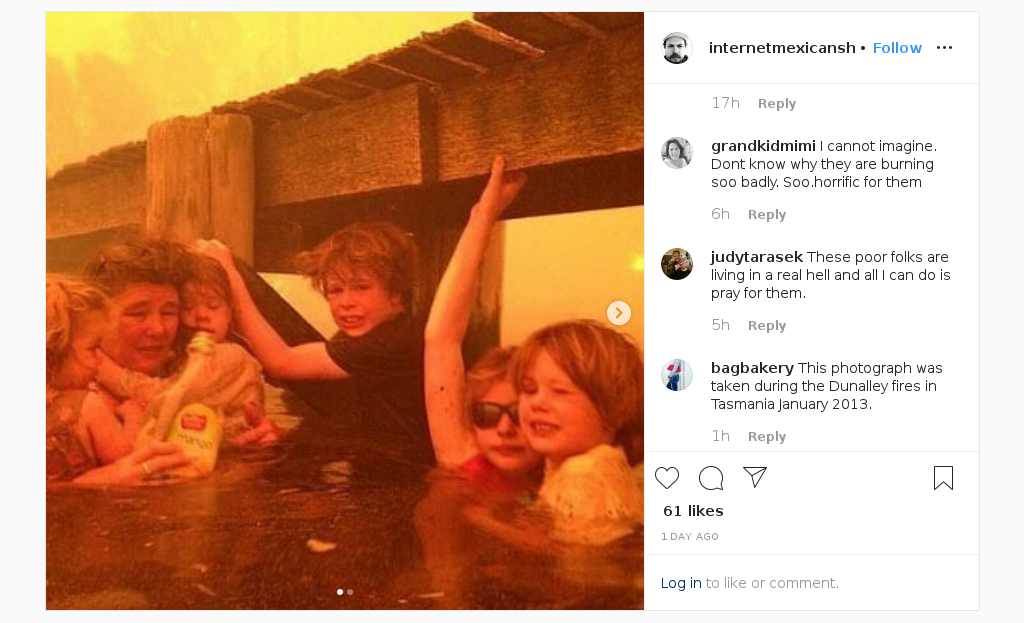 PHOTO: Screengrab from Instagram/internetmexicansh via AFP

A dramatic photo of a woman and five children half-immersed in the water next to a jetty under a bright orange, smoke-filled sky has been shared repeatedly on Facebook, Twitter and Instagram, in posts which claim "this is happening in Australia right now".

But the photo was actually taken in 2013 during bushfires in Tasmania, Australia.