You might know David Gelb for Chef’s Table, but he’s probably most famous for his ‘auteurisation’ and romance of the culinary arts thanks to the seminal documentary, Jiro Dreams of Sushi. More recently in 2021, Gelb released the feature Wolfgang, a celebration of the original "celebrity chef,” Wolfgang Puck.

It’s safe to say that Gelb was also responsible for making it PITA to get a seat at Sukiyabashi Jiro following the success of the now-ubiquitous documentary.

But that said, it’s good to know that it’s highly unlikely that Gelb will make the queues for his latest subjects longer than they already are. They’re long long enough as it is.

As part of a collaboration with Apple, Gelb has produced a short film called Poached, celebrating our very own Hainanese Chicken Rice. This is one ‘plot twist’ that you probably would have seen coming from a mile away: Gelb shot and edited the feature entirely on an iPhone 13 Pro.

Of course, nothing beats having professional equipment for the job, but Gelb pointed out one huge upside of using the phone as a camera – unobtrusiveness to the subjects when filming in tight spaces.

And because of the new iPhone’s ability to rack focus from one subject to the next, they could just focus on getting the framing right. They were able to adjust the depth of field in post-production as well. 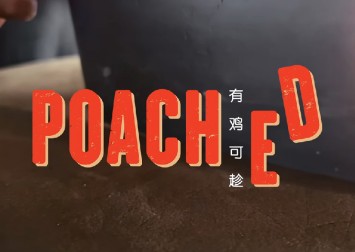 And speaking of getting the framing right, Gelb set his tribute against the much-talked-about rivalry between the famous Michelin Bib Gourmand Tian Tian Chicken Rice (Madam Foo Kui Lian with daughter and owner Loi Mui Yin) a stall set up by its once long-serving head chef (Wong Lian Tai), Ah Tai Chicken Rice.

Chances are, someone probably told Gelb about our other national pastime… gossip.