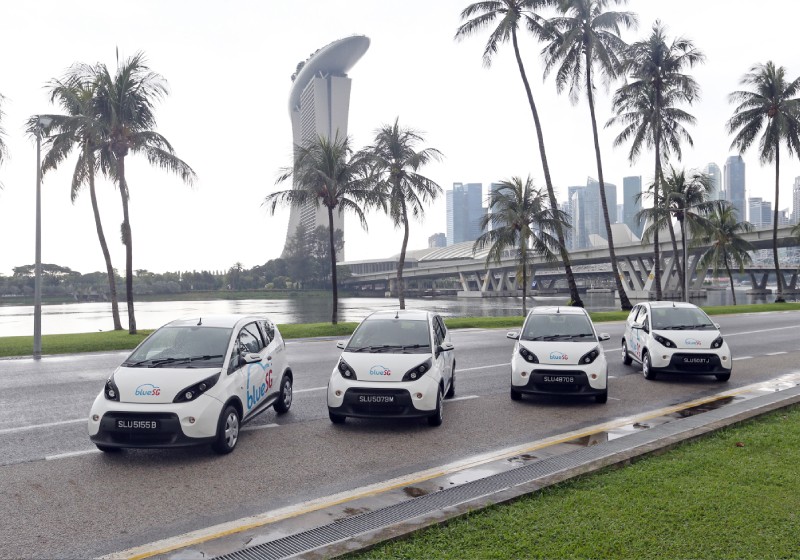 The total cost of ownership for EVs may also yield more favourable economics for commercial fleet owners that have higher-intensity operations with light vehicles or lorries ..., the Bain report says.
The Straits Times

Despite plans to drive pollutive petrol and diesel cars into history, electric vehicles (EVs) have still struggled to lose their training wheels.

The relative paucity of charging points has been held up as a "critical gap" in Singapore's electric road map.

But, even as policymakers look at fleet-wide electrification for larger transport companies, private players are moving into the charging market, with the state-owned SP Group leading in its target for charging stations.

In a surprise Budget 2019 move, Singapore's excise duty on diesel was doubled to S$0.20 a litre in February. But more charging points would spur investment in EVs, industry players said - the carrot to the tax hike's stick.

Bain had estimated in a recent report that South-east Asia's annual investment in charging infrastructure would be US$500 million (S$693.6 million)by 2030.

SP Group, which is owned by state investment firm Temasek Holdings, now manages 50 of the country's roughly 200 public charging points. It is gunning for 1,000 points by next year, including 250 fast-charging DC stations, which can charge a battery in half an hour.

SP Group is not the sole provider of public charging points in the city state. Greenlots, owned by Shell since January, first began operations in Singapore in 2010. It runs 34 charging points across 23 spaces, with most in the central business district.

Since May, Red Dot Power's electric charging operations have been funnelled through sister company REVO Charge. It operates seven charging points, with plans to hit 50 points in public and private areas.

And, as BlueSG marked its first anniversary in Singapore, the availability of public charging stations was given a boost with the electric car-sharing platform opening up 99 charging points across 25 locations.

Meanwhile, Swiss industrial vendor ABB, which already provides the equipment used by SP Group, will supply charging infrastructure for the operators behind two-thirds of Singapore's 60 electric buses in 2020.

But Goh Chee Kiong, head of strategic development at SP Group, noted that charging infrastructure - which the Bain report called a chicken-and-egg issue - now makes for "a critical gap, often expressed by prospective EV buyers in their considerations".

"One of the challenges in Singapore is the size of the market - which will limit the logic of having too many different networks competing with one another," Bain partner Dale Hardcastle later told The Business Times.

"It may be more logically and faster to have few networks set up by single parties of consortium to accelerate the pace of development."

Johan de Villiers, managing director for Singapore and South-east Asia at ABB, told BT that, as the sector evolves, "the need for collaboration is greater than ever", as businesses like his will have to work with manufacturers and operators on issues such as technology standards.

But Vijay Sirse, chief executive of REVO Charge, said operators are still trying to build up their own bases.

"There are also technical challenges for roaming that must be addressed - for example, the harmonisation of different communication and data transfer technologies," said Mr Sirse. "Another challenge is the safe and secure exchange of consumer usage data."

Tan Kong Hwee, executive director for mobility at the Economic Development Board (EDB), told BT that charging infrastructure providers must figure out the business case for their own solutions and services.

"Thereafter, they could become the first movers in Singapore's transition to EVs," he said. "(The) EDB will continue to engage various fleet players - including logistics companies - to understand how fleet electrification could benefit their businesses."

Christopher Leck, deputy group director of technology and industry development at the Land Transport Authority (LTA), had told the Credit Suisse Global Supertrends Conference in April that "it makes sense" to focus on electrifying large fleets of buses, lorries and taxis, rather than private, individually owned vehicles.

ComfortDelGro Corp, which has some 12,000 cabs on Singapore's roads, tied up with Greenlots in 2018 to run a fast-charging station through an engineering unit. It plans to open a second such station later this year.

These charging stations support ComfortDelGro's four fully electric Hyundai Ioniq and Kona taxis, which are part of an ongoing trial. Those drivers can also use other Greenlots charging services, and a charging station at Komoco Motors in Alexandra.

Bain has suggested that commercial fleets will help to flip the switch in the region, as fleet owners "may develop their own charging infrastructure and only would need to make outside investments (or tap third parties) for top-up charging" elsewhere.

The total cost of ownership for EVs may also yield more favourable economics for commercial fleet owners that have higher-intensity operations with light vehicles or lorries - especially in markets such as Singapore with higher fuel costs, the report added.

Bloomberg New Energy Finance has previously reported that "long-haul, heavy-duty trucks will be harder to electricify" and may have to tap natural gas and hydrogen cells.

Yet EDB executive director Lee Eng Keat, whose portfolio includes Singapore's logistics industry cluster, noted at the Invest Asia 2019 conference in May that, "as fleet replacements come, the cost of a diesel or a carbon engine versus an electric vehicle is coming to close up".

Bain pointed to ride-hailing firm Grab, which has deals with SP Group and car maker Hyundai to lease and manage 200 electric vehicles here until year-end.

It suggested that food delivery fleets could follow Grab's lead - although, when asked what other sectors might go electric, Mr Hardcastle said that logistics providers will need to wait for more EV options to hit the market, while public buses rely on larger and costlier batteries, making a switch a matter of "a few more years".

But "BlueSG and other car sharing services would be able to capture similar benefits to fleets like Grab or Go-Jek, depending upon their business and leading model", he added.

"When looking at charging capacity for buses and trucks, the industry is currently limited to a maximum charge of 600kW," noted ABB's Mr de Villiers.

"However, there is also significant potential for evolution in this sector, with 1MW charging possible in the not-too-distant future."

Grab's fleet electrification was part of a joint government trial - which, a spokesman for the LTA told BT, has found out that shared-car fleets could reap economies of scale "with higher daily mileage and potentially lower running costs" than private vehicles.

Mr Leck said that the LTA has worked with infrastructure vendors and hopes to "proliferate these sorts of charging infrastructure" publicly.

"But, for most of these companies... the primary purpose, as in the case of BlueSG, is really to provision infrastructure for their own shared vehicles first," he acknowledged.

Meanwhile, Kuehne + Nagel's Mr Singh said that the group will increase its number of EVs here "as the range of EVs improve, the size of the vehicle increases and there are more charging points along our transportation routes in commercial areas".

With the two electric vans now charged at the group's logistics hub in Pioneer Crescent, "an increase in the number of charging points across the island would have a positive impact on our plans to increase our EV investment in Singapore", he said, adding that government funding "would help to defray costs and accelerate the transformation" as well.