It's the era of next-gen gaming and premium streaming services, and life is good. More than good, actually, with the staggering number of entertainment options bringing more liveliness, enjoyment, and anticipation to the monotony of life. Fancy a watch party to unwind after a long day?

The 4K TV is here to help. Seeking solace and comfort in the act of hitting buttons and exploring an open-world setting? The PlayStation 5 and Xbox Series X can satisfy that gaming itch.

Keen to find out if the newest, biggest shows of the town lives up to the hype? Disney+ and Netflix are your best buddies.

That's a lot of tech trends to keep up with, and sadly, not everyone is equipped to know what's missing, to experience the whole package in all its glory.

Visuals are certainly important, as folks splurge on bigger and sharper screens, but home theatre aficionados know that audio plays an equally vital role in bringing immersion to action movies, that one extended Halo battle, or emotional moments in WandaVision.

The good news is that these days, one can have a powerful sound system without indulging in an amplifier, and splurging on oversized speakers that need to be placed around the living room.

Having grown their arsenal of sophisticated audio products over the years, homegrown electronics company Creative is no stranger to developing aural potential for the home, with its X-Fi Sonic Carrier and Sound BlasterX Katana soundbars making a name for themselves as impressive pieces of technology.

These singular pieces of audio equipment, which are often accompanied with a subwoofer, are easy to set up and powerful in their ability to project sound all around.

The hustle to sound even better, however, doesn't stop. As the soundstage continues to evolve, Creative's next stop is to redefine what it means to be a top-performing, premium soundbar.

The answer comes in the form of the Creative SXFI Carrier, which seeks to introduce a new dimension to the conventional speaker experience at an affordable $1,499.

The brainchild of a collaborative effort between Dolby and Creative, it features the world's first combination of the Dolby Atmos Speaker System (DASS) and the latter's proprietary Super X-Fi technology, to deliver super high-end audio and 3D cinematic sound in one device.

On the Dolby Atmos side, a seven-driver system in the soundbar helps to achieve this feat, with each driver installed individually and powered by its own dedicated amplifier built from state-of-the-art components.

This custom-designed driver configuration, as such, allows the first-of-its-kind DASS soundbar to package sound signature into a compact, small build.

Still, the devil's in the details, and the company makes sure to address them by pairing these custom-designed, low distortion drivers with sharp and clear dialogue-enhancing algorithms.

What all of that translates to is an enhanced and refined realm of audio immersion where the crack of gunshots in action films sound crisper, explosions more resonant, and battle music richer - an effect that's accentuated by the SuperWide stereo function and an accompanying 10-inch subwoofer that produces smooth, clean, and powerful bass across different room types at both high and low output levels.

Expect original movie and game soundtracks to become even more of a grand and epic listening affair.

On the cinematic side of things, viewers won't have to worry about having character dialogues drowned by the sound effects, as the integrated dialogue-processing function allows for the intelligent detection and enhancement of vocals and spoken interaction.

Say goodbye to the manual volume adjustment process, because viewers will no longer need to reach for the remote and turn up the volume when characters start whispering on-screen, or lowering it during scene transitions that carry sudden, loud sound effects. 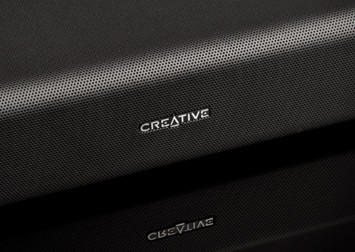 What happens, then, if you need a little alone time with your entertainment fix? That's where the SXFI Carrier shows its other side of things with Creative's industry-leading Super X-Fi - or SXFI for short, as per its name - holographic audio technology, which is built into a soundbar for the first time.

Using Creative's proprietary audio mapping technology, Super X-Fi offers a spatial audio experience according to how one perceives sound, based on the shape of their ear.

First-time users will have to register for an account on the SXFI app across any supported device and follow through a one-time head and ear mapping process to set up a personalised profile.

Once done, users are one step closer to audio immersion, as audio is piped through as if they are wearing an optimised, custom-fit headphone.

More importantly, this proprietary Super X-Fi feature allows for a similar sound signature through headphones as they do in speaker mode, which comes in especially handy during night time viewing.

Killing two birds with one stone is thus the name of the game: not only will their neighbours be able to enjoy peace, users can continue to revel in their gaming and streaming adventures while maintaining the highest of audio quality.

While convention dictates that size is directly proportional to power, the SXFI Carrier suggests otherwise.

Measuring 880 x 76 x 128mm, the soundbar packs big sound and great power output into its 3.6kg build, making it a viable addition to homes in Singapore - particularly so for the newer, tighter apartments.

There's also little compromise made to the port selection, with it granting several connectivity options for users, including an HDMI eARC port, two HDMI-in ports, a 3.5mm headphone jack, and a USB-C input.

Wireless use, meanwhile, features Bluetooth 5.0 technology for high-resolution audio streaming across various devices, so users can switch between their PS5, 4K TV, or laptop with ease. A dedicated SXFI OUT port has been included for easy connection to wireless SXFI headphones (like the SXFI Theater) as well.

Essentially, the SXFI Carrier is all about bringing the immersive experience to the cosy, comfortable confines of one's home - an advantage that has become increasingly relevant in the current landscape, where crowding in enclosed spaces, such as movie theatres and local area networks (LAN) shops, are highly discouraged.

But this practicality goes far beyond these unprecedented times, with its size and premium audio quality making home-based activities a convenience on a particularly lazy day.

After all, enjoying a drama series binge-watching session or gaming together in a player co-op title in a homely setting is always a good alternative to heading out and jostling with the crowd.

From watching movies to console gaming, the Creative SXFI Carrier is an all-rounder that makes for a welcome addition to one's gaming and streaming set-up.

Excellence in audio immersion aside, the soundbar was also a proud recipient of three Best-Of awards at the Consumer Electronics Show (CES) 2020, and it’s easy to see why – alone, Creative’s proprietary technology is already a force to be reckoned with, but its potential has been further nurtured with Dolby Atmos support.

Combine this with the gorgeous, beautiful visuals on display, and next-level immersion is all ready to impress. The Creative SXFI Carrier is out now and retails for $1,499 via Creative’s official website.