In case you haven’t kept up with local viral happenings, a (highly amusing) argument erupted at Bishan Park last Saturday (July 20) between a GrabFood delivery rider and an elder pedestrian.

But as the days went by, the true celebrity currently being hurrahed by the internet is... another dude who happened to be there. At the right place at the right time with the right moves and the right thing to say.

What allegedly happened before it all blew up on camera was that the rider — Mohamed Shamirrudan — had been reprimanded by the man for allegedly speeding on his e-scooter along the pavement. According to Shamirrudan, the man turned aggressive after he tried to leave, with the man apparently having whipped out his belt and started swinging.

It was then that the GrabFood deliveryman pulled out his phone to record the altercation. Shenanigans ensued, including how the hostile man accidentally pushed his own wife to the ground before trying to get other passers-by on his side.

Truly, the best part of the clip emerges after the nine-minute mark. 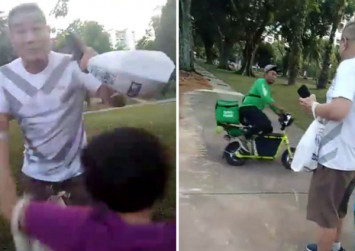 With a magical and dramatic entrance, in came a fellow GrabFood delivery rider executing a sick drift on his personal mobility device before coming to a perfect sideway stop right in front of the aggressive uncle.

Dude even had entrance music — a reggaeton ditty blaring from his loudspeakers. Before we could even absorb his enchanting arrival, the uncle then started pointing his phone's camera at him.

“Eh sial lah, what I do? I just came,” the second rider articulated in genuine confusion and chill-ness.

It is this very sequence and phrase that propelled the second GrabFood rider to internet adoration. His words are now immortalised, and will no doubt be quoted repeatedly among your friends in the weeks to come.

i really can’t get enough of this sequence. the slide and stop the “sialah what i do, i just came” a god amongst men pic.twitter.com/5eIu4FISon

Me sliding to girls dm "eh siala what I do I just came" https://t.co/R90fQs4iJZ

i’m at a loss for words the immaculate perfectly timed drifting and him saying “eh siala what i do i just came” this is comedic gold 😭 https://t.co/R8oCupe9Zt

I died at "eh siala what I do I just came" HAHHAHAHA I can imagine his face like wtf HAHAHAHAHAHAHA WALAO https://t.co/PQzUw0EUnC

“Eh siala what I do? I just came” HAHAHAHAHA ded https://t.co/xvihvnpvNF

The identity of the smooth rider is unknown, but at least Shamirrudin has decided to put the incident behind him. Speaking to STOMP, he has chosen not to pursue the matter but wants other riders in the area to know that the aggressive man has been problematic for some time.

Grab, on the other hand, is currently conducting its own investigations into the case.

As for the drift-lord deliveryman, may he swerve forevermore.

#Digital #meme #In Case You Missed It