An employer who recently aired his grievances in a Facebook post over millennial job seekers who applied for a job under him went viral on social media, with over 7,900 shares as of writing.

But along with the 15 minutes of fame came detractors who disagreed with what he wrote. The difference of opinions got so bad that he apparently got doxxed, he said — his residential address was even uncovered and circulated online.

“Are we raising our generation to be adult babies?” Delane Lim first queried openly in a Facebook post early Saturday (Aug 29) morning.

The small and medium-sized enterprise (SME) business owner was apparently disappointed by the responses of 12 local graduate job seekers he had interviewed over the past week, stating that “none of them [were] hungry for a job”.

Are we raising our generation to be adult babies? Well, I interviewed 12 local graduate jobseekers this week for a job... I’m disappointed with their responses because none of them was hungry for a job.

12 hours later, Lim composed his thoughts into a lengthier post, recounting his experiences with seven young candidates who applied for a job under him that offered a salary of $3,600 a month and 14 days of annual leave.

The candidates, according to his post, were painted as finicky and entitled. One had apparently requested for personal assistants, another wanted more annual leave, and another candidate asked for a transport allowance as the office was “too far” from her home.

“I felt I was being interviewed as [an] employer not doing my job to interview potential employees,” Lim wrote.

According to his profile, he’s a director at business consultancy firm The Afternaut Group, a founder and chairman at trainer provider Futuready Asia, and an executive director at Character & Leadership Academy, among other roles.

“I am pro-Singapore workforce but... they make it harder for us to consider employing them.”

Interviews of 7 interesting young candidates for a job which is a 3k+ salary with 14 days annual leave. === Local...

His post caused quite a stir on Facebook after it was shared widely. In the comments section, many sided with Lim and echoed his thoughts on young jobseekers.

But not everyone agreed with him — some have even written their own lengthy analyses on what Lim said. A rebuttal that was widely shared questioned Lim on what exactly he wrote in the job description that saw experienced candidates applying for the role. 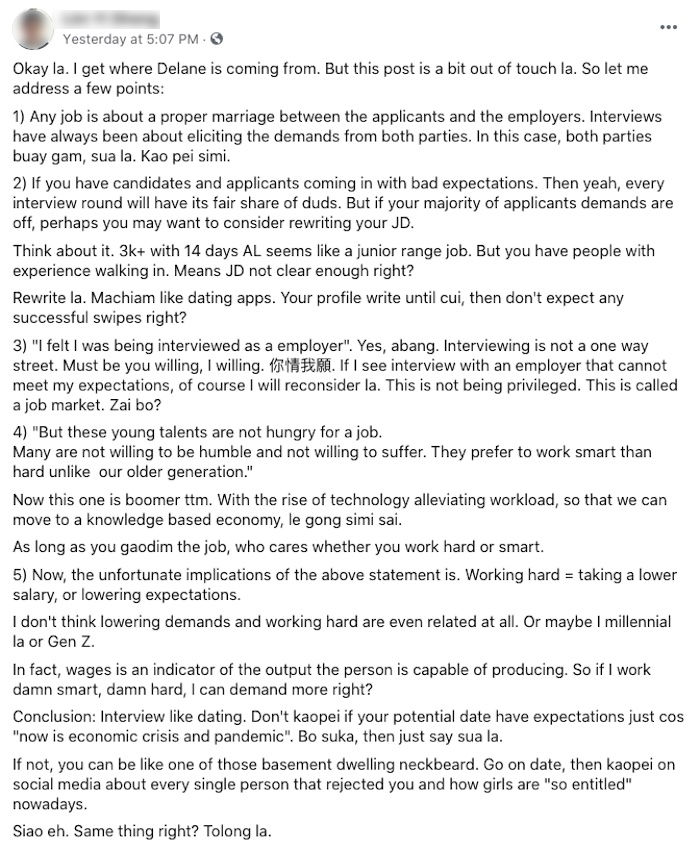 Others, however, appeared to have taken their dissension to extreme lengths. In a follow-up post, Lim claims that his personal information has been circulated on online forum Hardwarezone and expressed concerns that his residential address is being published openly.

A thread on the forum about Lim’s opinion on jobseekers he had interviewed holds over 1,100 posts and more than 159,000 views as of writing.

He added some clarification on how the firms under him have still managed to employ locals and are providing jobs during the pandemic.

”So I do hope that readers understand that we too are doing our part to increase employment (thanks to some hiring subsidy by the government) but don’t dox us without understanding our facts,” he wrote.

Well someone alerted me on my opinion being circulated, CSI-ed and even my addresses published on hardwarezone. Many of...

Prior to his viral post, Lim was featured by The Straits Times as an entrepreneur and philanthropist who underwent a turning point after nearly committing suicide when he was 25 years old.