Esports took a step into the sporting mainstream on Thursday as it made its debut at the South-East Asian Games, becoming a medal event for the first time at an Olympic-recognised multi-sport competition.

As the typhoon-hit Games, spread across dozens of venues in the northern Philippines, neared the halfway stage, esports made its grand entrance at a darkened arena in Manila.

It represents progress for video gaming, which was a demonstration sport at last year's Asian Games but has been left off the programme for the next edition in 2022.

Players from nine countries are competing over six days for medals in Mobile Legends, Arena Of Valor, Dota 2, Starcraft II, Tekken 7 and Hearthstone.

"This is a very, very historic day because for the first time esports will be played in the South-East Asian Games," local mayor Francis Zamora said at an opening ceremony at the 5,500-capacity San Juan Arena.

The 11-country Games, featuring a record 56 sports, were rocked by deadly Typhoon Kammuri which forced about half of Tuesday's events to be rescheduled.

It was the second time major sporting event has suffered typhoon disruption in Asia in recent months, after Typhoon Hagibis forced the cancellation of matches during the Rugby World Cup in Japan.

Despite 13 deaths in Typhoon Kammuri, none of the 8,750 athletes and team officials or 12,000 volunteers was reported hurt and a full SEA Games programme resumed on Wednesday.

Among Thursday's highlights, Olympic champion Joseph Schooling will be hoping to bag his first individual gold of the Games when he swims in the 50m butterfly final. 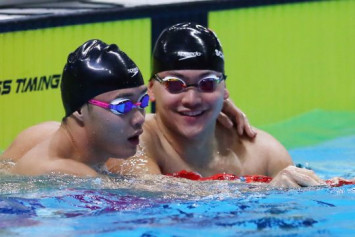 The 24-year-old Singaporean opened his medal account on Wednesday with a win in the 4x200m freestyle relay in a SEA Games record time of 7min 17.88sec.

Six medals are up for grabs on Thursday at the aquatics centre in New Clark City, the Games' main hub north of Manila, including the men's 1,500m freestyle, the longest event in the pool.

Places in the women's football final will also be decided, as Myanmar take on Thailand and Vietnam face the Philippines in semi-final clashes.

The Philippines remained in firm control of the medals table on Thursday with 60 golds - compared with the 24 it won in 2017.

Seven of the last 11 host nations have finished top of the medals table at the SEA Games, where the flexible sporting programme is traditionally weighted towards the home team.