Citizen's Arrest is a new card from Dominaria United.

The inaugural Wizards Presents provided plenty of excitement over the weekend for the year ahead but for now, we're back to our 'regular programming'.

With the release of Magic: The Gathering's new set Dominaria United comes new cards and the folks at Wizards have given us an exclusive look at one of them.

Is a planeswalker (or a creature) giving you some trouble? Enter Citizen's Arrest, another option for you to remove them from the battlefield.

With a casting cost of one mana and two white mana, Citizen's Arrest is an Enchantment that exiles a creature or a planeswalker until it leaves the battlefield itself.

It's not just a simple white 'removal' though; this card is actually tied deeply into the lore of the Phrexian (a race of biomechanical creatures) invasion of Dominaria that will be explored in the set.

For the uninitiated, the everyday people of Dominaria are slowly being converted into Phyrexian sleeper agents (through a process known as Compleation) and trust is becoming a luxury that most cannot afford.

Depicted in the art, which is painted by Indonesian artist Wisnu Tan, is most likely a Phyrexian sleeper agent being discovered and publicly dealt with.

Interestingly, the card also targets planeswalkers, which is a clear reference to a new (and impactful) development for Phyrexia in the war.

In Magic lore, planeswalkers are some of the most powerful beings in the multiverse and until the release of Kamigawa: Neon Dynasty in February, they were immune to being Compleated.

However, Neon Dynasty broke that pattern by Compleating Tamiyo, a shocking revelation that changed the world of Magic for good. Basically, Wizards is saying no one is safe from New Phyrexia now.

Their betrayal and transformation, only revealed in a short story released on Magic's website on Aug 18, swung the battle in New Phyrexia's favour and caused the death of fellow planeswalker Jaya.

How does it compare?

Well, no one is going to foam at the mouth over Citizen's Arrest, to be honest. It's not going to garner the same reaction as the reveal of the Liliana of the Veil reprint.

However, it's not fair to write off the card either just because of that. Creature removals, and by extension, an enchantment effect of exiling them from the battlefield until said enchantment leaves the field, aren't new. There are existing cards that do just that.

Read Also
Here's everything new with D&D and Magic: The Gathering revealed at Wizards Presents 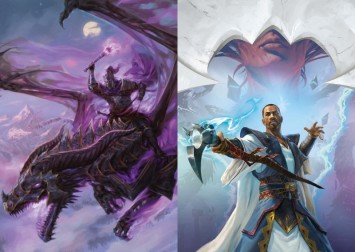 But, Citizen's Arrest allows it to target planeswalkers and that's what makes it useful. As a card type on its own, removing a planeswalker is a little trickier. You either need to attack it enough to remove all its loyalty counters or have effects that specifically mention "planeswalker" or "permanent".

The latter is basically any card or token that is on the battlefield.

With Citizen's Arrest, there's an additional removal option for white players and I'm not going to complain about having more solutions.

If you've ever had a Teferi, Time Raveler on the battlefield throughout the entire game, you'll know what we mean. (Yes, there are worse planeswalkers but that was our most recent game.)

Additionally, just like how planeswalkers require specific removals, so do enchantments. Hence, the card kind of forces your opponent to use up one of their responses if you've targetted something important.

Speed is key in Magic and there are other alternatives to Citizen's Arrest to consider. The card costs two white mana specifically and one mana of any colour and only lets you target a creature or planeswalker.

However, take Borrowed Time and Banishing Light for example. These two enchantments (same type as Citizen's Arrest) have the same effect, except they target "permanents", which means they are more versatile.

They also cost three mana to cast, but requires only one white mana and two mana of any colour, making it somewhat easier to hit the required number of coloured mana.

There are also other white removal cards which costs way less to cast, but these can only be used under very specific circumstances.

Like Portable Hole — it costs one white mana but only lets you exile something with a mana value of two or less.

It's not a bad card by any means and for us, who only play casual Commander, it's something that we can definitely consider.

#Digital #Game #magic the gathering #wizards of the coast