Facebook to start using smart glasses to capture data in Singapore, including video and audio

Data collection is done through a pair of glasses each Facebook employee wears.

SINGAPORE - Instead of looking down at your phone to read e-mail or text messages, you could soon read them off a pair of augmented reality (AR) smart glasses you are wearing.

This future is one step closer with the expansion of Facebook's Project Aria, an AR glasses research project, in Singapore.

The project will kick off at two locations - Merlion Park and Gardens by the Bay - with Facebook employees collecting data needed to build the software and hardware necessary for AR glasses.

Facebook did not confirm when data collection will commence.

Data collection is done through a pair of glasses each Facebook employee wears.

"The glasses do not display any information inside the lens. They are for research purposes to develop AR glasses in the future," he added.

For instance, a key feature being tested is the ability of the glasses to overlay digital information on the wearer's view of the real world.

Potential applications include turn-by-turn street directions displayed on the lens of the next generation of AR glasses, and interacting with a friend's avatar when an in-person meeting is not possible.

Images of members of the public can be captured by its front-facing cameras, but such data will be automatically scrubbed to blur faces as well as vehicle licence plates, Mr White said, allaying privacy concerns.

Conversations in public may also be recorded, but the glasses are designed to pick up the wearer's voice primarily.

"Aria is not built to be able to pick up a conversation at a table on the other side of a restaurant," a Facebook spokesman told The Straits Times.

Recording will stop when requested by anyone in the vicinity.

Raw data captured by the device cannot be viewed by the Facebook research staff, who will be easily identified by their blue company shirts and lanyards.

Mr White said Gardens by the Bay and Merlion Park were chosen as they are busy areas that offer a rich data set, and where visitors have a lower expectation of privacy than in a private or indoor location. 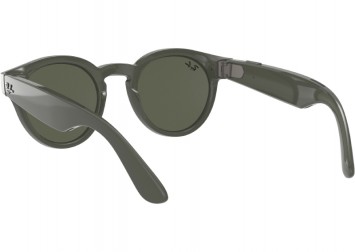 Permission has been obtained from the authorities for the data collection.

Project Aria is not a consumer product nor prototype, Mr White said. It is not the Ray-Ban-branded smart glasses that were released last Thursday. Instead, it is a research tool for future glasses, he added.

Mr White said: "The more we learn about concerns people have, the better we can make these glasses in the future."

Attempts at developing smart glasses have been hit with many challenges.

One such device, Google Glass, started being sold in the US in 2014, but garnered heavy criticism, with concerns surrounding its price, safety and privacy. Its production was discontinued in 2015, but in 2017, Google announced an edition for enterprise users.

Mr Lim Chong Kin, a lawyer at Drew & Napier who heads data protection, privacy and cyber security, said it is important to inform the public where data collection is done.

"There is always a risk that members of the public may consider such collection to be intrusive and feel that their privacy is being invaded, even though the collection in such a public setting may not strictly run afoul of the Personal Data Protection Act," said Mr Lim.