Mr Abdul Rahman found himself at the tail-end of the north route contingent when he was on his way to pick up an order.

When he found himself at the tail-end of a National Day mobile column in Woodlands Avenue 3 on Sunday (Aug 9), Foodpanda delivery rider Abdul Rahman waved at residents and received a loud cheer.

What many may not know is that it was one of the best birthday gifts he ever received, the 29-year-old told The Straits Times on Monday.

His birthday was on Aug 8, a day he spent working as usual before his wife surprised him with a cake when he returned home for lunch at 1pm.

"We had a quick celebration and ate lunch together, and I was off to work again at 3pm."

Mr Rahman, who has two sons aged 2 and 4 years old, has been a delivery rider for about a year.

He was an auxiliary police officer for a few years but had left the profession because he did not want to continue working night shifts.

He now works up to nine hours a day, six days a week, to provide for his family who lives in a three-room Housing Board flat in Woodlands.

His wife, 31, works in the engineering sector.

"Food delivery is not an easy job. We have to travel through rain and heat, and deal with traffic also. I would say it is a high-risk occupation.

"Delivery riders are part of the frontliners, and deserve to be appreciated. I'm very happy to see all the nice comments online."

Many on YouTube had described him as a hero. One even wrote: "Without unsung heroes like him, I would have starved during the circuit breaker period."

A ban on dining-in during the lockdown from April 7 saw demand for food deliveries increase by about 20 to 30 per cent. But jobs were lost amid the pandemic, with many forced into the food delivery role to make ends meet.

On Sunday, Mr Rahman found himself at the tail-end of the north route contingent at around noon, behind five mobile column motorbikes, when he was on his way to pick up an order from a nearby Esso petrol station.

The roads covered by the five mobile columns were closed on a rolling basis and reopened to traffic once the column passed. Motorists were advised to avoid the routes until the end of the segment at 1.20pm.

"The other vehicles took different routes to avoid the mobile column. But passing through Woodlands Ave 3 was the only way for me to get to Esso.

"So I just proceeded on the same route as the contingent," he said, adding that he had to pick up bread and bottled water from Esso and deliver them to a home in Woodlands Drive 16.

He followed the contingent for about 10 minutes, waving to the crowd enthusiastically, a spontaneous decision propelled by his easygoing nature.

"Some of the onlookers yelled 'Foodpanda!'. It was a very funny moment," said Mr Rahman, who was caught in a 25-second video which has been shared widely. 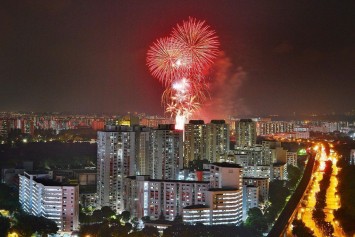 His four-year-old saw the video and was beaming with pride when he returned home at 8pm.

"He told our neighbours: 'My daddy is in the National Day parade.'"

It was not his first time, he noted. In 2011, he was part of the police contingent when he was doing his full-time national service.

On Sunday, the northern route of the mobile column - comprising about 13 vehicles from the Singapore Police Force, Singapore Armed Forces and Singapore Civil Defence Force - travelled from Khatib to Sembawang.

Frontliners and essential workers from sectors such as healthcare and social services were aboard some of the vehicles, and residents greeted them with cheery waves.

Then came Mr Rahman, whose motorcycle and role in the pandemic, may have been dwarfed by the others, but who was surprised by the enthusiastic cheers.

But heroes, as those who watched the video and left their comments noted, come in all shapes and sizes.

On National Day, a Foodpanda delivery rider showed Singaporeans that everyone counts.