Mr Goy Thuan Heng said the good thing about going cashless is the time saved from having to count out change for customers.

Mr Goy Thuan Heng introduced cashless payments at his soya bean stall in West Coast Hawker Centre five years ago, but it was more trouble than it was worth at first.

"No one used the cashless system for most days in the first one to two years. At most, there were three customers," said the 57-year-old in Mandarin on Thursday (June 4).

"At that time, I also had to pay a monthly fee of $28 for the device and the payment options were limited."

The tide has slowly begun to turn.

Mr Goy, who has been plying his trade at the centre for 24 years, said he now makes around 10 cashless transactions daily with a peak of more than 20 during weekends, although they still account for only 3 per cent to 5 per cent of his total takings.

It lets stallholders receive payments through 19 different providers, including PayLah, Dash and GrabPay, and Mr Goy is no longer paying a monthly fee.

Mr Goy said the good thing about going cashless is the time saved from having to count out change for customers.

But he said many of his fellow hawkers are still wary of the technology.

For instance, some of them have expressed worries over whether they get paid when the machine experiences a mechanical fault and the receipt fails to emerge.

The easy solution is to check with the customer if the transaction has gone through on their end before taking further action, he said.

"If you use it long enough, you get used to it. It's like how everyone got used to smartphones and the Internet," Mr Goy added. 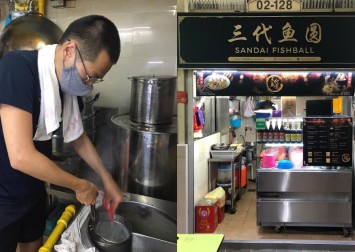 In recent days, his peers have been coming to him to ask how they can get a cashless system for themselves.

They are being spurred by the Government's Hawkers Go Digital initiative, which offers a bonus of up to $300 per month over any five months for hawkers who sign up for SGQR and fulfil the minimum transaction requirements of at least 20 per month.

Hawkers who have already adopted SGQR like Mr Goy are also eligible for the bonus.

"I think it's a good incentive because it's easier to get started when everyone is doing it together," Mr Goy said.

"For me, going cashless was something of a loss in the beginning, but I look at the big picture.

"Big countries like China are already moving ahead so quickly with cashless payments, and this is what we have to do so Singapore can catch up."

"If we don't adapt now, we will be in trouble later."