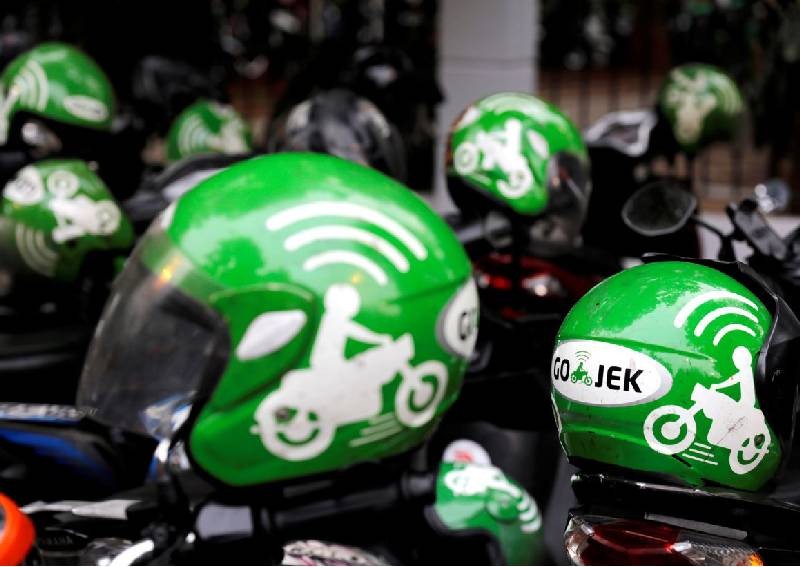 Gojek driver helmets are seen during Go-Food festival in Jakarta, Indonesia, in 2018. The firm is active in four countries and owns a startup e-wallet app in the Philippines.
Reuters

SINGAPORE - Indonesian ride-hailer and payments firm Gojek is experiencing a rise in food delivery orders but a fall in rides across South-East Asia, as it readies measures to help merchants and drivers deal with the coronavirus outbreak, co-CEO Andre Soelistyo said on March 24.

Having evolved from a ride-hailing service founded in 2010 to a one-stop app via which users can make online payments and order food and services, the US$10 billion (S$15 billion) firm is active in four countries and owns a startup e-wallet app in the Philippines.

"In Singapore, the drop is less significant than expected," Soelistyo said in an interview. "In Vietnam the impact has been more severe, we see food delivery increasing, while transport is reducing. It's been similar in Thailand."

Soelistyo said the company had seen the same trends in its main market of Indonesia and expected those dynamics to increase as the capital Jakarta goes into a two-week emergency period.

He said Gojek had launched contactless deliveries and was working with drivers and merchants on the sanitision of vehicles and other health safety measures.

The archipelago of 260 million people has confirmed 688 cases of the virus and 55 deaths in last two weeks, mainly concentrated in Jakarta where Gojek is headquartered.

The firm, which closed an additional US$1.2 billion funding round last week and is backed by Google and Singapore investor Temasek, will put a lot of its plans on hold, Soelistyo said.

"We expect that in the next few months when we see an actual recovery, we can continue the plans we have," he said. "In the meantime, we need to be prudent on capital management and cost management."

Soelistyo called talks of a merger with rival Grab "market speculation" and said the company was focused on the virus crisis.

Gojek said on March 24 that it had created a fund to support its drivers and partner merchants whose income has been affected by the coronavirus, with Gojek's annual salary increase budget redirected to the fund and the senior management team donating 25 per cent of their salaries.

Soelistyo said the fund would launch with a budget of US$6 million.

The CEO said additionally that Gojek was in discussions with the Indonesian government about stimulus measures to help their drivers, many of whom lease their vehicles and have to keep up rental payments when income drops, and noted authorities were looking at temporarily waving interest on motor vehicle loans.

Soelistyo said developers from Gojek and other large Indonesian technology firms were also working with the government to create a contact tracing app for the country, similar to one launched by Singapore on March 23.