Hotel room in Japan priced at $1.25 a night if guests consent to livestream their stay

Japan might have a reputation for being one of the more expensive countries to travel to for a vacation.

Believe it or not, you'd still be able to have an awesome trip, even with a modest budget.

Especially when it comes to this 10-roomed hotel — Asahi Ryokan — situated in Fukuoka, Japan, where guests can opt for the cheaper and more enticing rate of 100 yen (S$1.25) a night.

The actual price that you'll also have to pay? Your privacy.  Guests that are staying in Asahi Ryokan's Room 8 would then have to broadcast their stay to the entire world online via the hotel's YouTube channel, One Dollar Hotel. 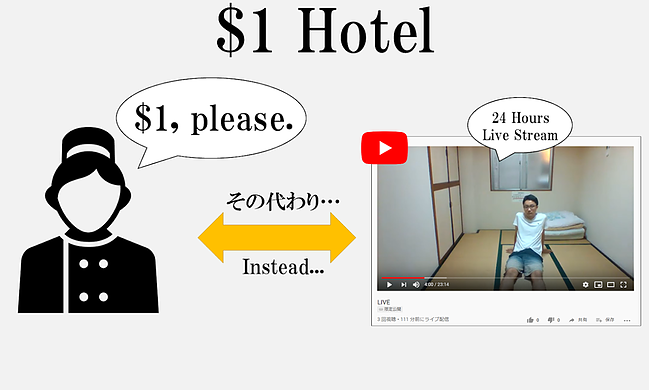 Some context, first. Tetsuya Inoue, the owner of Asahi Ryokan, first implemented this live streaming scheme after he had inherited the hotel from his grandmother. His goal had been to utilise an unpopular room to generate revenue from YouTube advertising.

Inoue told CNN that the hotel is "a very old ryokan" (traditional Japanese inn) and that he had been in search of a "new business model". Wanting to stand out from the competition, they would "need some added value, something special that everyone will talk about."

"Young people nowadays don't care much about the privacy," Inoue added on. "Some of them say it's OK to be [watched] for just one day."

Even so, some privacy restrictions have been in place. Inoue explains that the bathrooms are off-camera and there will be an area, next to the bathroom, provided for the guests to change. The feed would be video-only, so conversations would not be recorded. And of course, no sex.

When the room isn't occupied, viewers would then see Inuoue live streaming while he works in his office.

This might not be the first quirky place to be seen in Japan, but it definitely won't be the last. Who knows, maybe someone will even integrate a flight simulator into a hotel room to attract aviation geeks. Oh, wait…