SINGAPORE - The race to build smartphones with flexible screens is heating up after Huawei announced its second foldable handset on Monday (Feb 24), during a virtual press conference streamed from Barcelona, Spain.

It is a direct sequel to last year's Huawei Mate X, and looks almost identical.

Both have a 8-inch flexible screen that wraps on the outside of the device. When folded, this display splits into a 6.6-inch main screen and a 6.38-inch secondary display.

This is unlike its main competitor, the Samsung Galaxy Fold, which opens like a book to reveal a 7.3-inch display.

The Mate Xs, unlike its predecessor, will be sold outside China as well, including Singapore, Malaysia, Indonesia and the Philippines.

Huawei has yet to announce its price and exact date of release in Singapore, although the phone is set to debut here next month. The Mate Xs (8GB RAM and 512GB storage) is priced at 2,499 euros (S$3,800).

In highlighting the improvements made to the Mate Xs, Huawei said its screen and hinge are more durable than its predecessor. It has a quad-camera system anchored by the same Leica-branded 40-megapixel (MP) main camera as the one in last year's Huawei P30 Pro.

Also, it is equipped with Huawei's latest 5G-capable Kirin 990 processor.

But Huawei's ambitions for it may be stymied by the United States' trade ban, which prevents Huawei from including Google apps and services, such as the Google Play Store, Gmail and Maps, in the Mate Xs.

Instead, it will be one of the first Huawei devices to launch with a revamped version of AppGallery, Huawei's app store.

The smartphone runs on Huawei EMUI 10 interface, based on the open-source Android 10 mobile operating system (OS).

Read Also
The new foldable phones: should you get one? 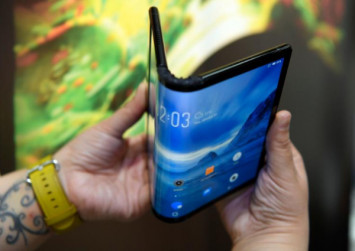 This interface has been customised to make full use of its 8-inch screen with a multi-window feature that lets two apps to be displayed side-by-side. Users can transfer text, images and documents between the two apps by dragging and dropping the content from one app to the other.

In addition to the Mate Xs, Huawei today also unveiled the MatePad Pro 5G, a flagship 5G-capable Android tablet, Wi-Fi 6 routers and refreshed versions of its MateBook series of laptops.

The latter will come with the latest Intel 10th-generation processor and run the Windows operating system.

The flagship MateBook X Pro laptop and the MatePad Pro 5G tablet will be available in Singapore, but their pricing and availability have yet to be disclosed.

Like a number of tech firms, Huawei has been affected by the cancellation of this week's Mobile World Congress trade show in Barcelona - the largest in the industry - owing to concerns over the ongoing coronavirus outbreak.

Some companies have switched to holding virtual press conferences instead of their planned media events.