I tried staying fit, sane and refreshed during the circuit breaker with a Fitbit Charge 4

Suffice to say, it’s a weird time to be putting a fitness tracker to the test for a review. Considering the current circumstances, it’s a little odd to strap on something that’s constantly bugging you to get moving while everything else in the world is telling you to stay put at home.

It’s a conundrum, but thankfully the Fitbit Charge 4 does more than just guilt trip you into as much physical activity as you can muster. Sure, you’re still welcome to run, cycle, walk and do a bit of static exercises outdoors, but even if you can’t (or won’t, no judgement here!) Fitbit’s latest tracker in its popular Charge series still does plenty to keep you sane during the circuit breaker.

But what’s exactly new in the fourth iteration of the tracker band? The biggest addition here is obviously its built-in GPS, which means that Fitbit users don’t have to bring their phones out with them during their outdoor activities to record their routes, heart rate, distance and speed. 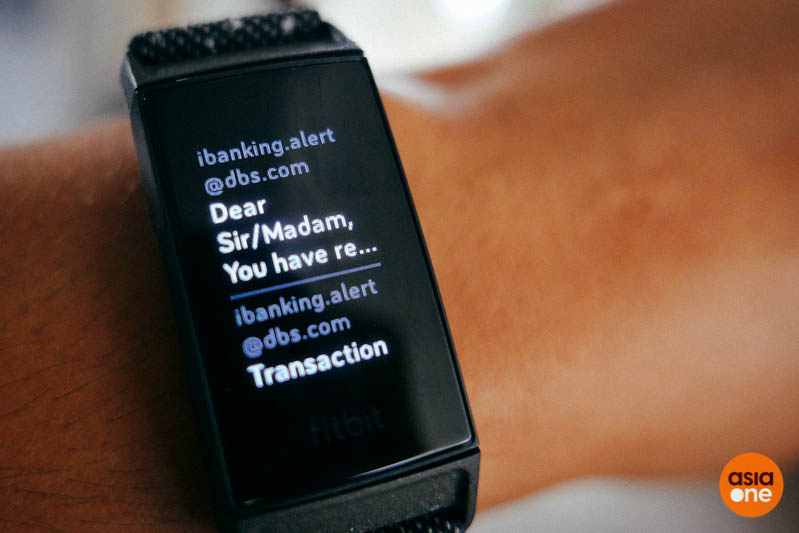 Other small but appreciated upgrades: Spotify control, NFC payment via Fitbit Pay, and app notifications. Rather standard stuff for smartwatches, mind you, but you have to remember that Fitbit Charge 4 is ultimately a fitness tracker, an electronic watchdog to record your vitals and your activities.

So having these features on board is a very welcome bonus — especially since this device can last up to seven days on a full charge. Real-life usage, however, determined that it needed to be juiced up after five days of usage. 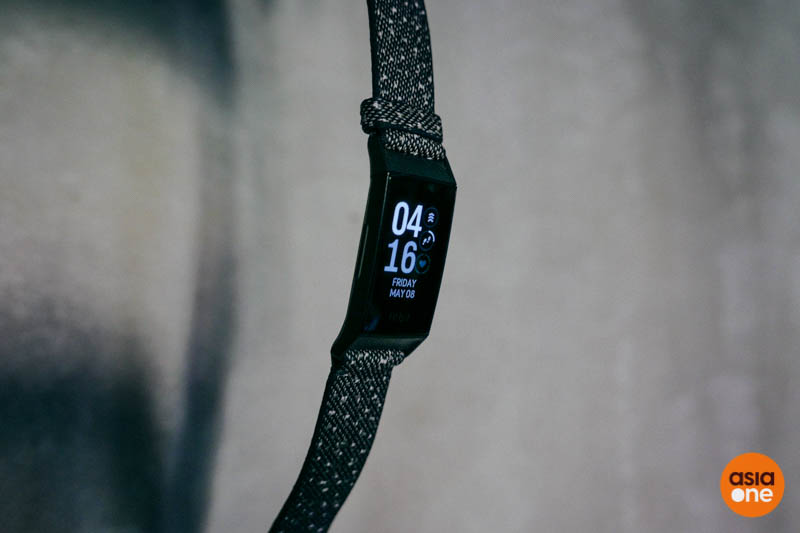 Again, the global situation right now isn’t exactly primed for people to go out and perform as many physical activities as they can, but the easiest way to close the rings while also getting some fresh air is to go out for runs. Which I absolutely hated before the circuit breaker but found myself doing at least three times a week. Don’t shame me; it’s perfectly legal as long as I take precautions, and indeed I do.

The Charge 4’s in-built GPS came in handy to chart routes during the runs, and so far it gave pretty consistent readings both with and without my phone on me. But the handier metric is the addition of heat maps in the app, which offers data on the intensity of the runs according to my heart rate and my pacing. 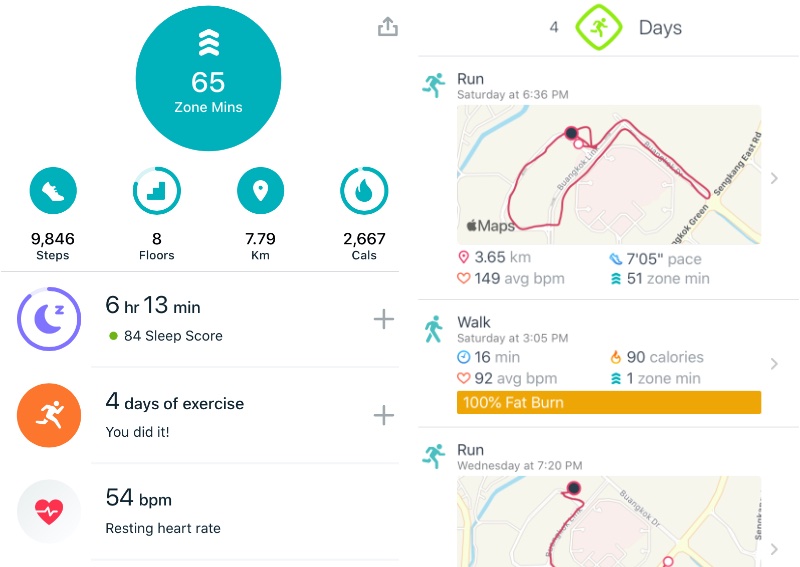 That’s not to say it’s perfect. It seems to take eons for the GPS function on the Charge 4 to actually connect, so most times I’d end up bringing my phone along just in case.

In fact, the Charge 4 doesn’t seem to like playing well with others, but that’s probably by Fitbit’s design. It refuses to work together with my Nike Run Club app and syncing with Apple Health or Google Fit requires third-party apps. Yes, you do have Spotify control on the device, but what’s the use if I can’t change songs in the middle of tracking my workout? 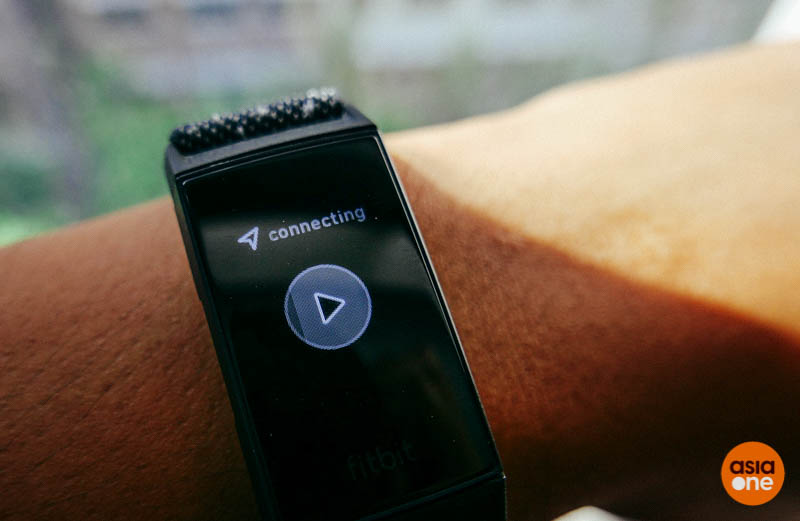 Minor gripes though. It’s actually pretty insane how this little thing is keeping me even fitter than before the circuit breaker started. There’s a new fitness metric called Active Zone Minutes that measures how long you’re engaged in heart-pumping activities, and even notifies you when you’re in fat burn, cardio or peak zones. I can imagine it works best for high-intensity interval training when exercisers want to know when they need to push themselves harder. 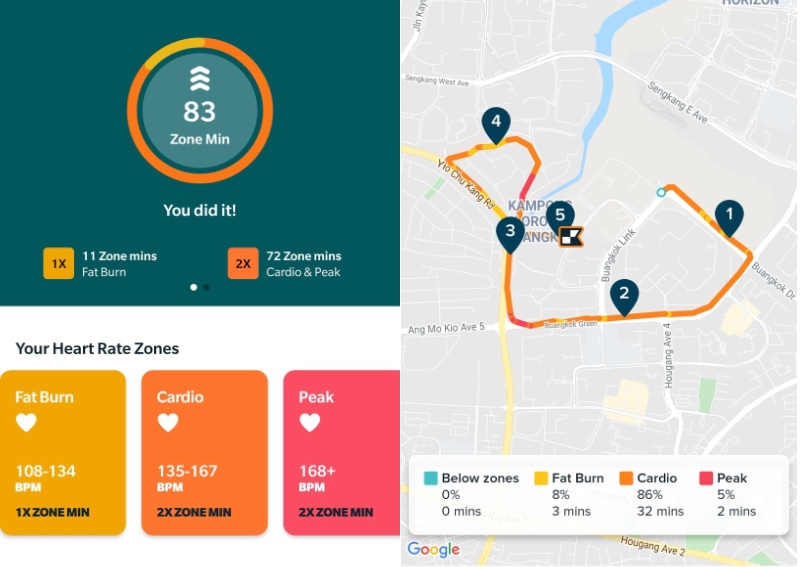 For the non-schmucks like me who’ve been way in tune with their fitness even before the circuit breaker, the more helpful personalised insights are locked behind a Fitbit Premium subscription at $9.99 a month. Which Fitbit reminded me is closely linked to the Live Healthy SG initiative — local subscribers can get free Fitbit Inspire HR trackers or big discounts for other Fitbit devices like their Versa 2 smartwatch.

What users get for that price is deeper, actionable health and fitness guidance according to their stats. Health reports, guided programs, further insights, you name it. Probably not something that you’d want to consider right now since you can’t do as much as before, but maybe it’s something you want on the list when this all blows over. Eventually. 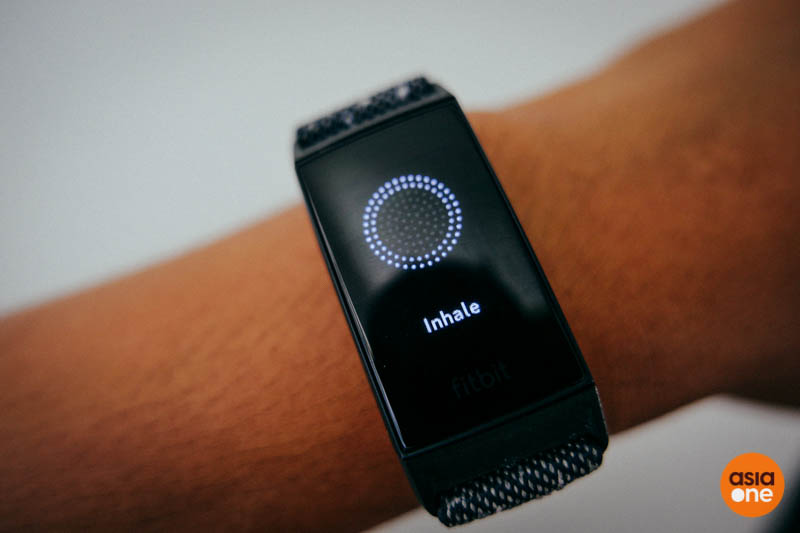 I’ll admit that the so-called essential job I’m in is nowhere as stressful as the demands required of frontliners during the Covid-19 pandemic, but feeding the internet content machine does have its days of misery. Keeping sane can get pretty tiring when your occupation consists of constantly consuming information and belching it back out onto the web.

I’ve never been one for meditation, but I suppose the Relax app on the Charge 4 did help to slow things down a little during the news hustle. Whenever I needed a moment of calm, I tried undergoing guided breathing sessions on the tracker, which vibrates signals indicating when to inhale and exhale, all the while monitoring my heart rate as it progressively goes down.

It didn’t do much for me in the end (I was constantly out of sync), but it added a little mindfulness to the daily routine stuck at home. 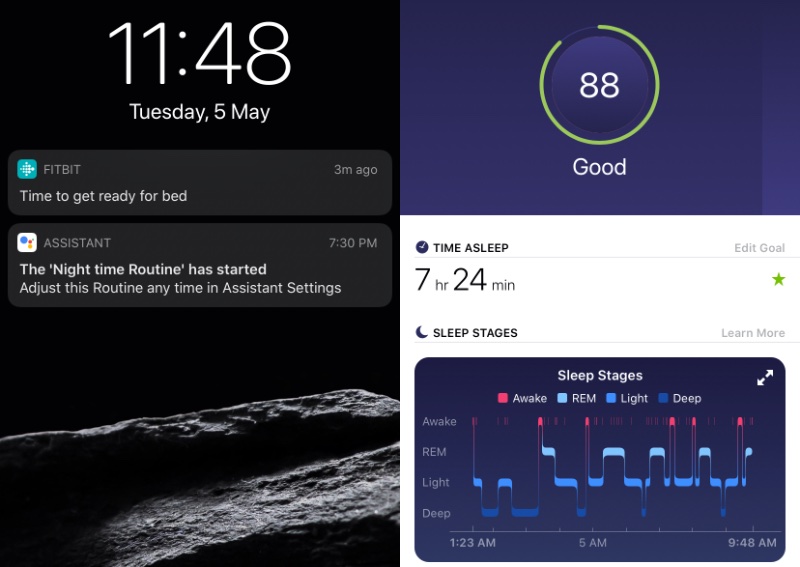 In the first couple of nights I had the Charge 4 strapped on my wrist while sleeping (you get used to it), it was pretty depressing to see how little rest I was actually getting. Five hours of sleep where I was spending 12 per cent unconsciously awake? No wonder I’m a caffeine junkie.

But therein lies one of the best features of the Charge 4. Using a combination of an accelerometer to detect movement and an optical sensor to monitor heart rate patterns, it tracks your time asleep down to the duration spent cycling through different sleep stages. When you wake up, the Fitbit app gives you a Sleep Score out of 100 based on all the data gathered. 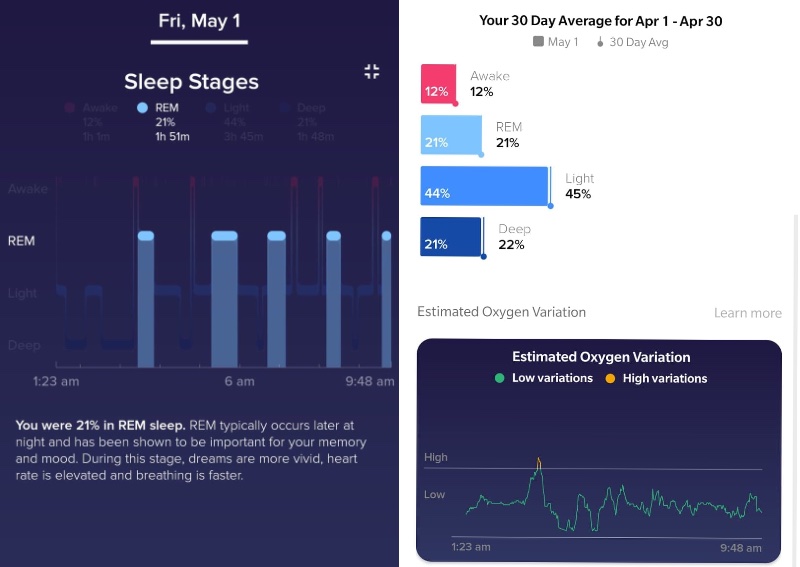 It’s oddly comforting to look at your sleep habits. I, for one, have been having more vivid dreams during the circuit breaker (and I’m not the only one), and I found out why — my REM sleep cycles have been nominally increasing.

The methods in measuring sleep patterns remain questionable, but what the Sleep Score actually does is make it all easier to understand. It's gamifying the whole thing really since what you want to achieve each night is a better score. The easiest way to get a good grade is to just get more high-quality sleeping hours in, and that’s what I found myself chasing. 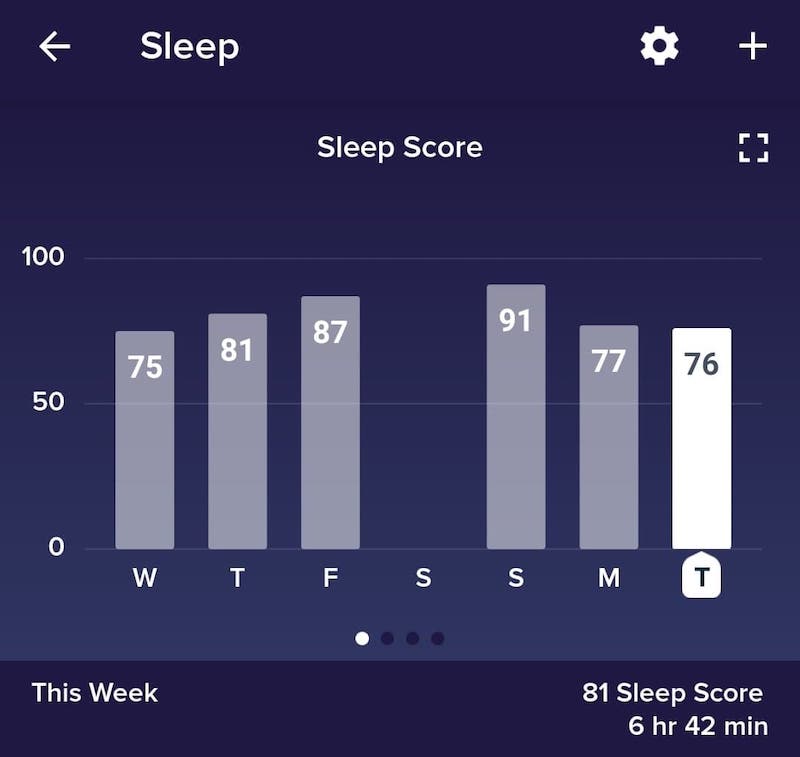 It became a pretty straightforward formula: the higher my sleep score, the more energised I felt throughout the day working from home. Plus, Fitbit says that they’re rolling out the Smart Wake feature — where it’ll attempt to wake you up at an optimal time during your sleep stage — to the Charge 4 so users can get out of bed feeling extra refreshed.

Of course, it could be all be a placebo. And it certainly is not for everyone, since monitoring even more personal metrics could actually cause more unnecessary stress. But what’s for sure is that the combination of better sleep, better peace of mind and better health always helps, especially during an unstable time.