iPad and iPad mini go on sale: Which one gets your vote?

This is a bumper year for iPad releases because the iPad mini is joining in the fun this time.

Granted, it's just one more tablet to talk about than usual, but that makes two interesting options, which can only be a good thing.

The regular-sized, 10.2" iPad is now into its ninth generation. It's equipped with the A13 Bionic, which offers a 20 per cent performance boost over its predecessor.

Meanwhile, the base storage option has been upgraded to 64GB of storage with a maximum of 256GB, while the price tiers remain the same compared to last year.

The iPad might be an entry-level tablet in the Apple range, but it still has an ambient light sensor to enable True Tone for a more natural-looking display regardless of your environment and lighting.

It also has a new 12MP Ultra Wide front camera with Neural Engine that supports Centre Stage, a feature that automatically pans the camera to keep subjects in view - even people joining in the conversation mid-way.

This is the new baseline iPad experience, and it's made better with new features on iPad OS 15 as well as a bunch of new apps.

Live Text recognises text in photos and easily lets you search directly. Other features like Quick Notes makes it easy for users to scribble notes, which can be transcribed and made searchable through Spotlight.

But the secret star of the show is undoubtedly the iPad Mini.

The new 8.3" iPad mini now sports a larger 8.3-inch Liquid Retina display and, interestingly, a new A15 Bionic chip that's faster than the processing unit on the regular iPad.

If you've ever thought, "if only my phone had a bigger screen," then this is perfect. The cellular option offers 5G and Wi-Fi 6 connectivity and the USB-C port supports up to 5 Gbps transfer speeds (USB 3.2 Gen 1 equivalent) for high bandwidth applications.

Furthermore, it's a far more ubiquitous standard; much easier to find a charger among friends - and strangers. The iPad Mini's compact size and speedy performance make it an unlikely portable workhorse.

The display is decent: p3 wide colour gamut and 500 nits of brightness, so it's suitable for consuming video content as well as making presentations, and handier as an ebook reader too.

And like the other iPads, it supports the Centre Stage feature as well as the Apple Pencil (second-generation). Niche, you say? I suspect it might be a sleeper hit.

The new iPads are now available online (apple.com/sg/store or Apple Store app) and at physical stores.

Read Also
How good is gaming on Apple iPad 9? 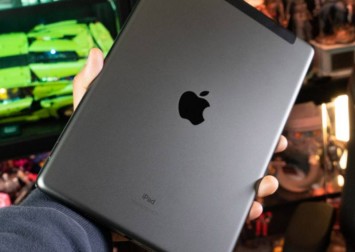 The iPad starts from $499 (Wi-Fi, 64GB) in silver and space grey finishes. Bear in mind you need the first-generation Apple Pencil ($138) for this iPad.

The smart keyboard goes for $239 (over 30 language layouts) while the Smart Covers are priced at $75 in black, white, and English lavender.

This article was first published in Potions.