The beaches of Sentosa could in future be patrolled not just by human lifeguards but also drones that could save lives. The idea to tap technology to help distressed swimmers arose from a project by the Institute of Technical Education (ITE) undertaken by four staff members and four students.

The project, for which ITE provided funding of about $30,000, started in April last year and development of the drone prototype began in January this year. The ITE team designed and built a drone with six propellers that carries a lifesaving float which is dropped for a swimmer who needs help.

The swimmer needs to be wearing a mobile transponder - an armband device - so that the drone can detect its location when it is activated.

At the same time, a warning will be sent to a device on shore so that the lifeguard on duty can respond immediately.

The institute wants to teach students skills like basic programming and analytics, to meet the demands of emerging jobs.

Aerospace avionics lecturer Soh Kee Teck, who is overseeing the drone project, said that based on tests, the drone would take 40 seconds from the lifeguard station to reach a distressed swimmer about 250m away from the shoreline. A lifeguard takes about four minutes to cover the same distance. 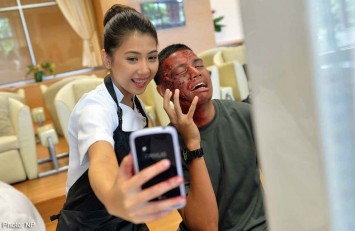 ITE aerospace avionics student Stephen Ong, 17, said: "We built the drone from scratch, and we learnt how to fix it, how to test it. There were more things to learn. After coding, there's definitely still errors so we have to troubleshoot too."

The three other students involved are Kenneth Ng, Erhan Harith Abdul Malik and Sanjay Shagaran. All are pursuing a Nitec in aerospace avionics and in their first year of study at ITE College Central.

They are in the midst of analysing the data from the first on-site trial at Sentosa's Palawan Beach earlier this month.

The next trial is scheduled for early next month. The aim is to complete the project by November and hand it over to ITE's Technology Development Centre, which liaises with industry partners.