Residents in Japan continue to recover and rebuild after facing one of the most devastating storms in 60 years: Typhoon Hagibis. Torrential rains, vicious winds, and multistorey floods left a trail of death and destruction in its wake last Saturday (Oct 12).

But out of the tragedy came something that should put some pep in the nation's spirits. A Japanese Twitter user (@nextstage_002), who had been out and about in the aftermath of the typhoon, stumbled upon a rare and gorgeous sight along Tone River in Japan's Kanto region.

A day after Hagibis battered the country, the one-minute-long video was shared on Twitter with a translated caption that read: "A large number of wild boars were evacuated from the Tone River!!"

The clip shows a family of wild boars making their way out of Tone River, with wet fur glowing in the morning sun.

They could first be seen scrambling up the river bank and then across the walkway. After waiting for everyone to catch up, they ignored the person taking the video and dashed across the waterlogged rice paddy fields. It's a beautiful sight amidst the absence of other humans.

The clip has since been viewed seven million times, bringing joy to the heavy-heartedness of those who survived. 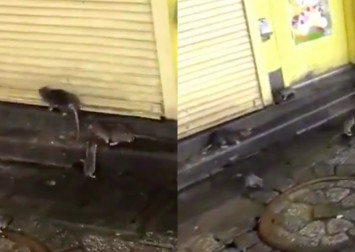 Some have referred to the video as an inspiring masterpiece, while several others were worried about the safety of the residents in the region, especially the children. Others deemed that the video looks to be a scene from Studio Ghibli's Princess Mononoke film.

In the wake of natural disasters, rats were first encountered on the streets of Shibuya, and now, wild boars at Tone River. Let's hope that we don't have to write about Japanese cockroaches next.