There was a decline in the proportion of voters who tapped traditional media.

SINGAPORE - Digital platforms, like local mass media websites, surged in importance during this year's general election that many have dubbed an "Internet election", according to a survey commissioned by the Institute of Policy Studies (IPS).

At the same time, there was a decline in the proportion of voters who tapped traditional media, such as television, print and radio, for information at least once a day, compared to GE2015, said IPS senior research fellow Carol Soon, who presented the survey findings at an online forum on Internet and Media Use on Thursday (Oct 8).

Social networking sites like Facebook and instant messaging (IM) platforms such as WhatsApp were the two most popular modes of political engagement among the 2,018 voters surveyed.

The forum was organised by the IPS, which a week ago, presented the findings of its survey on the GE2020 results at a similar forum.

The think tank had conducted similar polls after the 2011 and 2015 general elections.

In GE2020, the People's Action Party's (PAP) vote share shrank by almost nine percentage points to 61.24 per cent, compared with the 2015 election.

Debunking the myth of a digital divide among generations, the Baby Boomers - those aged 56 and older in the survey - used IM the most to learn more about political parties and candidates.

But people's primary reasons for voting, rather than Internet use, were the strongest predictor of how they voted, said Dr Soon. Reasons such as "I always voted for the same party" and "party's track record" mattered more to those who voted for the PAP.

"Having alternative views in Parliament" and "dislike for one party" mattered more to those who voted for opposition parties.

The two camps also diverged in how they engaged online.

Overall trust in the Singapore mass media rose, compared with 2015.

But younger voters had significantly lower levels of such trust, compared with the sandwiched generation (36 to 55 years old) and Baby Boomers. 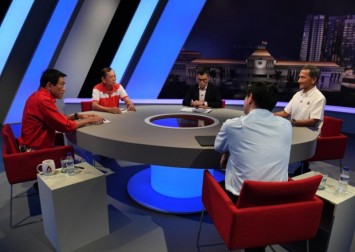 They were also more likely to turn to social media to express their opinions when they did not trust what was reported in mass media.

The increase in trust was greater for older respondents.

They also had the most political knowledge, based on the correct answers they scored in a list of questions posed by the survey.

However, younger voters also gained the most political knowledge, compared to 2015.

"This points to the need to encourage not just active citizenry, but informed citizenry," said Dr Natalie Pang, a senior lecturer at National University of Singapore's Department of Communications and New Media, and a member of the research team.

They were also more politically active, having signed a petition in the last six months or attended opposition e-rallies.

Those who switched sides to the PAP this year cited the quality of candidates as their biggest concern.

They were generally uninterested and inactive in politics, and attended e-rallies the least.

Swing voters did not differ from non-swing voters in their use of mass media and social media, said NUS Department of Communications and New Media Associate Professor Zhang Weiyu, a member of the research team.

"What influenced their swing had more to do with wanting alternative views in Parliament, and little to do with using social media," she added.

The key takeaway, said Dr Soon, is that instant messaging was the only platform that saw similarly high levels of adoption across all the age groups surveyed.

But older voters were more passive in their instant messaging activity, she added.

They used it to learn about the general election and candidates, but did not actively belong to messaging groups or discuss politics with other people.

"Their content could be quite different from what younger voters are circulating," she said.

"They could either be sharing screenshots, or be on the receiving end of messages from political parties, such as through WhatsApp channels."