The range is the result of feedback from women in the gaming community, overseen by a team comprising mostly of women – not that guys won’t like the gear in this collection, of course – and designed around comfort for long play sessions, a less aggressive look and feel, and customisable aesthetics; hence the White Mist base colour (white lah, basically).

The G735 Wireless Gaming Headset is designed for comfort and accommodates smaller head sizes, while the White Mist finish is complemented by soft, ethereal RGB lighting.

You can further customise the headset with optional ear pads and mic booms in pastel pink (Pink Dawn) and green (Green Flash).

The headset is rated for a 56-hour battery life (without lighting and at half-volume, 16+ hours with full lighting) and features on-ear dual-audio mixing with concurrent audio from Lightspeed and Bluetooth-enabled devices so you never need to take off your headphones to switch between your phone and your game.

G715 and G713 Mechanical Gaming Keyboards are tenkeyless (TKL) keyboards in wireless and wired configurations respectively. Like the G735, the two TKLs are decked out in White Mist and feature per-key RGBs as well as perimeter lighting.

Aesthetics is certainly the headline act here as Logitech has gone to the extent of designing a cloud-like palm rest (included) to match the keyboards.

If you find white a tad boring, Logitech has designed alternative keycap sets and top plates in Pink Dawn and Green Flash so you can tweak your keyboard to taste.

You can also choose between linear or tactile switches to suit your typing preferences. The clicky option is not available in Singapore because Logitech probably isn’t evil enough to subject us to that.

The G715 supports both Lightspeed wireless and Bluetooth connectivity and has a battery life of up to 25 hours.

Much like the G735, the G705 has been ergonomically tweaked to better fit smaller hands through a reshaped contour and sculpted thumb rest a la MX Master, which helps facilitate hours of comfortable play. 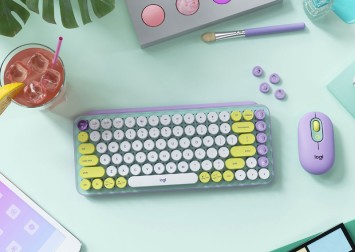 It also weighs a modest 85 grams, which is light but isn’t Superlight light, but that’s also a way more expensive mouse.

What the Superlight doesn’t have, though, is three ethereal RGB zones featuring the Aurora series’ signature lighting.

The dpi count of 8,200 is much lower than the leading gaming mice of today but it’s more than enough for most people (1kHz polling rate, 130 IPS max speed, and 30G max acceleration).

What’s more important is Lightspeed wireless, six programmable buttons and a reasonable 40-hour battery life with the lighting on.

Of course, there are also matching accessories in the form of a colour-coordinated mousepad and carrying case, which fits both the mouse and G735 headset (not for SG market).

Blue Yeti has also created a matching USB microphone in Pink Dawn and White Mist colours, along with matching Streamlabs overlays to match the microphones’ aesthetic.

Being a Blue product, it naturally supports Blue VO!CE software and the goofy vocal effects like DJ Robot or Helium Chipmunk, along with studio tools like EQ, limiter and Nvidia Broadcast Noise Removal, and HD audio samples.

If you’re interested, the above mentioned will be available at selected retailers from Aug 9, 2022. The special edition Blue Yeti USB microphone for the Aurora Collection has been earmarked for an August release but pricing is yet to be confirmed.