Netizens explain why joss paper is tossed in the air, but religious leaders have urged against it

The seventh lunar month is upon us, and Chinese devotees have already started burning joss sticks and paper as part of their observance to pay respects to the departed.

But as local blogger Benjamin Lee noted, town estate cleaners have had their chores increased during the Seventh Month season as they clean up the unburnt offerings scattered and left behind in public spaces.

The veteran blogger — better known by his moniker Mr Miyagi — put up a strongly worded post on Facebook on Wednesday (Aug 19) that rebuked those who “anyhowly chuck [their joss paper] all over the place and leave it for the migrant worker to tidy up [sic]”.

The picture that accompanied his post depicted a lone cleaner attempting to sweep up a mass of joss paper scattered on the ground near a dedicated burning container.

Mr Miyagi’s stance changed, however, when commenters informed him that there was a reason why the offerings remain unburnt and strewn on the ground. The blogger has since updated his post to reflect what he learned.

UPDATE: A commenter has explained that the throwing of kim zua AROUND the bonfire instead of in it is to distribute it...

Though some devotees believe that tossing joss paper into the air is part of the tradition, the Taoist Federation, the Singapore Buddhist Federation and the Wat Ananda Metyarama have long affirmed that such a practice is not needed.

As far back as 2014, interfaith activist and Taoist priest Chung Kwang Tong urged people to practice responsibility when burning offerings.

”Remember, don't throw the long strips of white joss paper during the prayers as these could be a potential fire hazard. It [is] very unsightly and irresponsible to leave these paper all around the estate,” he wrote.

Please be considerate and responsible when you burn offerings. Remember, don't throw the long strips of white joss paper...

”Think about how the cleaners will feel when they have clean up after you unless you will clean all this up yourself,” he wrote in a post on Thursday (Aug 20).

［💖Kindness In Cultural Practices🎋］ It had started..... There are better ways to practice this🍀 Please do not burn your...

When asked to clarify on the ritual, the monk assured that throwing up joss paper would not be necessary, advising instead to toss them into the burner. 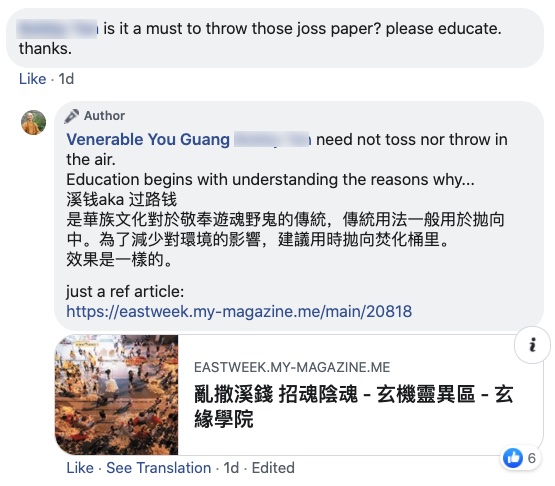 #Digital #Hungry Ghost Festival #Religion #In Case You Missed It