Necessity is the mother of invention, goes the old saying.

For Singaporeans Eric Heng, Ben Hui - both 27 - and Issac Yuen, 28, their quest to find the perfect mechanical keyboard has led them to start making their own.

Their goal was realised last month when they delivered Kirin, a $149 wireless tenkeyless (TKL) mechanical keyboard. It is the first product from the company they founded six months ago, called Tempest.

They would gather regularly with friends in their homes for LAN parties - a term to describe a group of people coming together with computers connected by LAN (local area network) for the purpose of playing multiplayer video games.

Mr Heng says: "I think we have practically played every major (game) title since then."

They would also take along their own keyboards to the gaming sessions, which started their interest in keyboards.

However, they were not satisfied with off-the-shelf keyboards, particularly with their plastic build and weak battery life.

Mr Heng was the first to try his hand at building one. And when he brought his custom keyboard to the LAN parties two years ago, the other two caught the bug. "As we game a lot together, we get to check out one another's gear. That's how he dragged me into this," says Mr Hui.

Mr Heng says it was then when they thought of starting Tempest. "We are wondering why some of these keyboards are so expensive. Is it because of the Bluetooth mechanics behind them? And as we found out more, we decided we can create something for the market that is actually worth the value for the keyboard," he says.

Mr Hui came up with the name Tempest. "Tempest means the eye of the storm. So we want our keyboards to be the centre of the user's desktop."

With Kirin, it took them a year of designing, working with a factory in China, stress-testing the prototypes to finally launching it.

Unlike most keyboards that use the more common acrylonitrile butadiene styrene (ABS) keycaps, the Kirin uses polybutylene terephthalate (PBT) keycaps, which are said to be more durable.

In addition, while most wireless keyboards use AA or AAA batteries, the Kirin has a built-in 1,850mAh lithium-ion battery that can be charged via a USB-C port. The USB-C port also allows for wired connection to a PC or Mac computer, apart from the keyboard's Bluetooth connectivity.

The trio decided on a TKL design because the mouse can be held closer to the keyboard to prevent shoulder ache. In addition, they kept the keyboard's weight to 1kg for portability.

"We are trying to tackle problems users might not think they are facing. But we are trying to give them a keyboard that achieves better results," says Mr Heng.

Despite their gaming roots, they did not want to make just a gaming keyboard. Mr Heng says they want to educate the masses on what a keyboard can do. 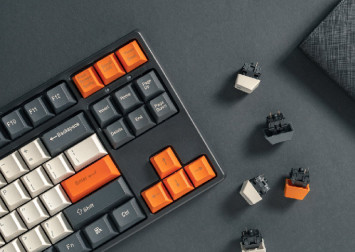 "Every keyboard has a different feel and it is always up to personal preference. We want to help people find the keyboard that is more suitable for them," he says.

Apart from selling the Kirin, Tempest is also selling accessories, such as keyboard keycaps and cables, on their website (tempest.sg).

To achieve their dreams, the three founders have quit their day jobs. Mr Heng was previously a system analyst, while Mr Hui was a financial consultant and Mr Yuen was a pharmaceutical lab technician.

They started Tempest with their savings, with a total investment of $50,000, and are not looking for investors at this moment.

Mr Heng said: "We are able to provide for ourselves at the moment. And we don't want control to be handed over to those who have no experience in keyboards."