The centres provide 24/7/365 access to the massive data, processing power and storage that digital services around Europe require.

A new industrial revolution is under way on the outskirts of Dublin.

Fortunes are being made in clusters of anonymous warehouses housing vast data centres.

Roe is a new breed of prospector, presiding over one node in a network of 48 data centres in Ireland.

"People are saying, 'Well everything is going to come from the cloud'," Roe said.

"Well where's the cloud? The cloud is data centres."

A FORTUNE IN THE MAKING

According to industry lobby group Host in Ireland, the country has become the unlikely engine room for everything from video streaming to phone apps and social media.

Government incentives, a skilled workforce and high connectivity to Europe and America are helping attract data centre construction investment which is expected to reach nine billion euros ($10 billion) by 2021. "People are saying, 'Well everything is going to come from the cloud'," Roe said. "Well where's the cloud? The cloud is data centres".Photo: AFP

The sector employs 5,700 people in full-time equivalent roles including 1,800 as data centre operators, according to a report produced for Ireland's investment agency.

Nestled in an industrial estate next to a motorway, Servecentric is a "co-location" site shared by multiple businesses, dwarfed by the exclusive "hyperscale" establishments of Google, Amazon and Facebook.

In the lobby, visitors are asked to present ID to a security guard. Fingerprint scanners abound and 160 CCTV cameras record footage stored for three months.

One client requires six levels of security, including airport-style checks and private guards in their portion of the centre.

Roe, touring the facility in a crisp suit, declines to say who, but says they are a "household name".

The secrecy is in service of the library-like rows of cabinets decked with blinking servers plugged with neatly bundled wires. All are locked away like safe deposit boxes. Nestled in an industrial estate next to a motorway outside Dublin, Servecentric is a "co-location" site shared by multiple businesses, dwarfed by the exclusive "hyperscale" establishments of Google, Amazon and Facebook.Photo: AFP

The space whirrs with the constant air conditioning required to prevent overheating -- evidence of voracious power consumption which, for some, is causing concern.

State-owned power provider Eirgrid says data centres "can require the same amount of energy as a large town" and could account for 31 per cent of Ireland's total energy demand by 2027.

In May, Apple pulled out of a 875 million euro ($1 billion) data centre development on Ireland's west coast after objectors claimed it could eventually increase the demand on the grid by up to eight per cent.

With Ireland set to miss its 2020 and 2030 climate change targets, according to the country's environmental watchdog, industry is keen to play down energy concerns.

Facebook has made a PR push at its new 200 million euro ($230 million) centre in Clonee near Dublin, assuring locals it is 100 per cent powered by renewables.

There are also concerns that the opacity and transnational nature of the data business could end up with Ireland harbouring or supporting unethical or illegal practices of the type seen in last year's Cambridge Analytica scandal.

"The ethical implications of hosting AWS data centres in Ireland are potentially vast," he said.

AWS, which plans to expand its Dublin operations, sells controversial facial recognition technology to US police. Library-like rows of cabinets are decked with blinking servers plugged with neatly bundled wires. All are locked away like safe deposit boxes.Photo: AFP

"These corporations are or have been involved in many of the dominant controversies and debates of our contemporary networked era including privacy, data breaches and surveillance," O'Neill said.

Data centres do have at least some local support.

When Apple pulled out of plans for the west coast Athenry development -- predicted to bring 150 jobs to the remote area -- campaign group "Athenry for Apple" mourned it as "an absolute hammer blow to the locality".

But plans for a million square foot (93,000 square metre) data centre, currently at the early stages in the nearby west coast town of Ennis, have sparked local concerns. 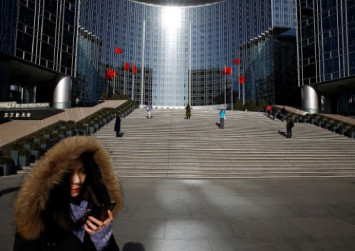 "Data centres use massive amounts of energy, which is all well and good if the energy is sustainable and secure," said Theresa O'Donohoe, who represents the community in planning matters.

"Surely if a data centre is the technology of the future we should be powering it sustainably, as is required to address climate change?"