At New York Fashion Week, robotic dresses take on a life of their own

Dancers perform on the runway for rag & bone spring/summer 2020 during New York Fashion Week: The Shows at Skylight on Vesey on September 6, 2019, in New York City.

Fashion and technology have often gone hand in hand, improving supply chains and bringing the world's runways to the masses, but at this week's shows in New York, robotic designs took centre stage.

The dresses were conceived with the help of a kit designed by Anina Trepte, a former model and founder of the 360Fashion Network, who wants designers to integrate technology into their work even if they cannot code themselves.

"I am on a mission to encourage other women to get into tech," Trepte told AFP.

On Trepte's initiative, designers Clare Tattersall and Azrael Yang used the kits to conjure up six dresses unveiled in a Harlem church at a show organised by Melange, a movement promoting diversity in fashion and the art.

Tattersall, a Briton who lives in New York, created one dress with large futuristic flower petals that open and close mechanically on their own -- the perfect eye-catching cocktail attire. 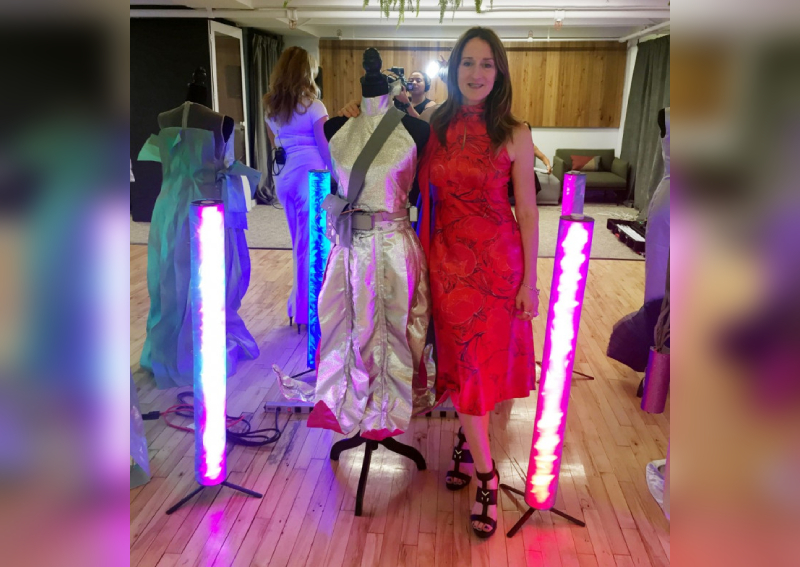 Clare Tattersall poses with some of her creations her at the Robotic Dress Exhibition on September 9, 2019 in New York. PHOTO: AFP

A second dress has a large silver hood that goes up and down with the click of a button.

The last is a fitting frock for the #MeToo era.

It features bits of metal appliqued to one shoulder, and when hidden motion sensors detect someone who is too close, the metal rattles and shakes.

Yang, who is based in Beijing, took her inspiration from the ocean and seaweed for her work, which gently undulates like waves, guided by sensors and environmental data.

"A phenomenal result," Trepte said of the dresses.

Trepte, a tall American-born German woman with red hair and big blue eyes, gave up the catwalks and moved to Beijing more than a decade ago to devote herself to fashion tech. 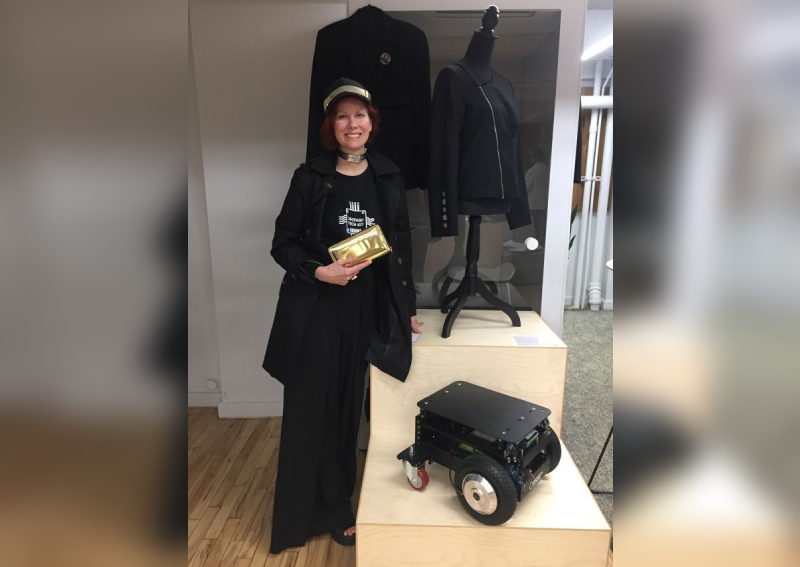 Trepte next to one of her inventions, a robot that prepares cocktails and is attached to wearable technology that allows the user to send it orders by pressing buttons in the sleeve. PHOTO: AFP

"All the designs and the tech on these clothes were made by women -- and the men did the sewing, ha ha ha!" she said.

"My goal is to get girls involved in math and technology, show them that technology is a creative tool," she told AFP.

Tattersall teaches girls of all ages about wearable technology, which she sees could be especially important in the future in terms of improving our health and fitness.

The dresses were also shown at a separate exhibition in New York's Union Square, along with with some of Trepte's own wearable tech -- jewellery that lights up, wallets that charge cell phones and an "SOS" ring that sends a text and a GPS location to an emergency contact.

Also on display were kits to make gloves with LED lights or coats with heating, and even a robot that can prepare cocktails and is activated by wearable tech hidden in the sleeves of a jacket.

There was a special guest at both the Harlem show and the subsequent exhibition -- the humanoid robot Sophia, made by Hanson Robotics.

Her features and gestures are lifelike -- right down to her eyelashes. The effect is unnerving.

At the Melange show in Harlem, she gave a speech about diversity. On the catwalk: models of all shapes and sizes, races and sexual orientations.

Rag & Bone joined the robotic fun in a different way -- for its big return to New York Fashion Week after a three-year absence, it deployed a giant robotic arm to film its catwalk show.

The images were shown live to the public on giant LED screens.

The robotic arm -- which was connected to sensors capturing the models' movements -- was almost a character in the show, according to Aaron Duffy, who directed the robot for the show.