A traveller using the contactless clearance at Changi Airport.

Some Singaporean travellers no longer need to present their passports or scan their thumbprints when they return home through Changi Airport Terminal 4 (T4).

Under a new contactless immigration trial, eligible Singaporeans just need to verify their identities through scans of their iris and face at an automated lane, the Immigration and Checkpoints Authority (ICA) announced yesterday.

Singapore citizens aged six and above holding passports beginning with the letter K, and whose passports were issued after Jan 1 last year, are eligible for the trial.

No prior sign-ups are required.

The six-month trial for contactless immigration clearance in T4 started on Nov 25.

This is the second such trial, following the Tuas Checkpoint trial which ran from April to October, and involved some 22,500 Singaporean travellers.

About 90 per cent of these travellers at the Tuas Checkpoint were able to clear immigration smoothly.

The remaining 10 per cent had unsuccessful attempts capturing quality images due to a lack of familiarity with the process.

A similar process is being carried out at Changi Airport T4, with the addition of the use of animated graphics to better guide travellers. 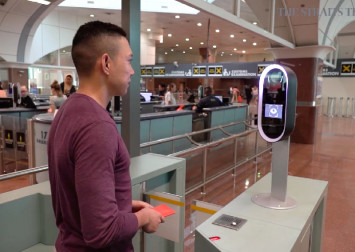 The ICA is testing out two types of contactless clearance flows at T4 to compare their feasibility, efficiency and accuracy in clearing travellers.

In the first flow type, a traveller will stand in front of the first flapper to capture iris and facial imaging. On-the-move facial recognition ensures that it is the same traveller entering the lane, while another traveller can begin his or her process at the first flapper. The immigration process is completed after the second flapper opens, with no stopping required.

ICA officers will be on-site to assist travellers.

The first flow type has started at one automated lane while the other will commence early next year.

Sunglasses, caps or other headgear that may obstruct the scanning of the iris and facial images should be removed when passing through the clearance lanes, the ICA said.

Coloured or patterned contact lenses are also not advised to be worn, the authority added.

The ICA aims to implement contactless clearance at other checkpoints for all eligible travellers from 2022.