A disheartened mother who witnessed her daughter getting bullied by other kids at a playground recently took to Instagram to air grievances over what she believed was an instance of racism.

The mother had recounted an incident that took place while her 19-month-old daughter was playing at a playground, where the toddler apparently “had her first encounter of discrimination”.

According to the parent, there were two older Chinese girls and another Chinese girl who was younger than her daughter, who is of Indian-Muslim descent. 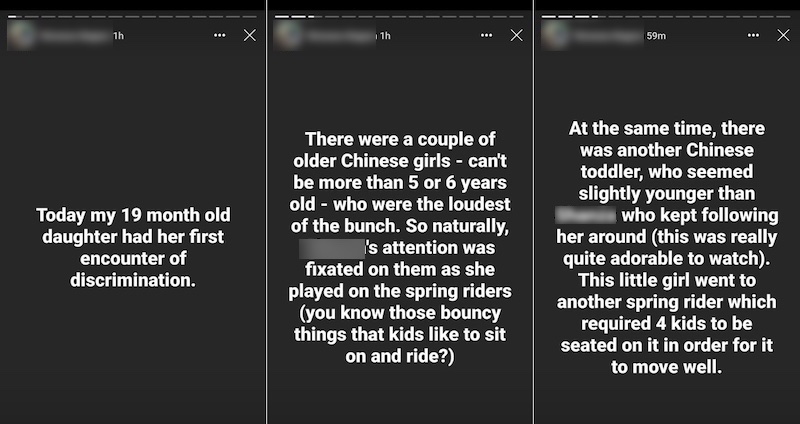 Eventually, all four of the kids went to play on a four-seater spring rocker. When the Indian child got on one of the rockers, the mother noted that the two older Chinese kids “immediately got off” and “started snickering to one another”. One of them was said to have gotten close to her daughter and said “I don’t like you” with a smile. 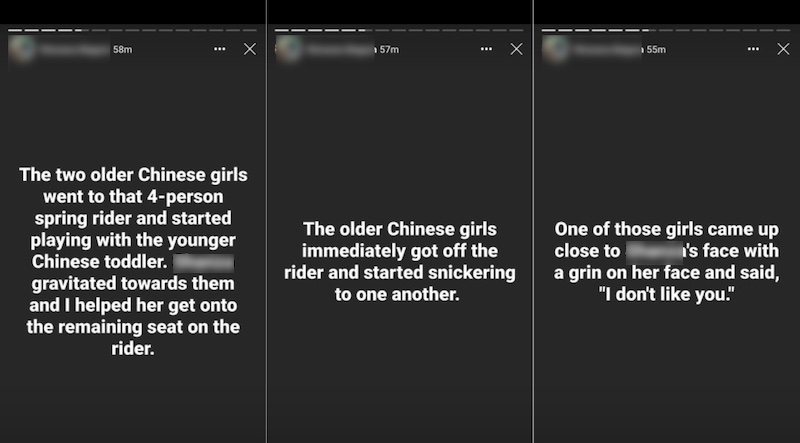 “My heart clenched for my daughter as I saw her trying to comprehend what the girl had just told her,” the mother wrote. Though she was angry, she composed herself and told the girls that it was “not a very nice thing to say” before they ran off.

“It might not seem like a big deal to a lot of people, but as someone who belongs to one of the minority groups in Singapore, and who has a background in teaching intercultural communication, I know and recognise the signs of discrimination and racism when they happen,” she affirmed in her post.

The parent acknowledged that the Chinese kids she told off were too young to know better and placed the blame on their parents.

“Kids pick up careless remarks made by their parents and pass it on in places like the playground, which are supposed to be safe spaces for kids to play and have fun,” she wrote.

She ended off by urging parents not to pass on their prejudices to their kids and clarified that her daughter has had amazing experiences with other Chinese kids and parents who’ve been more welcoming. 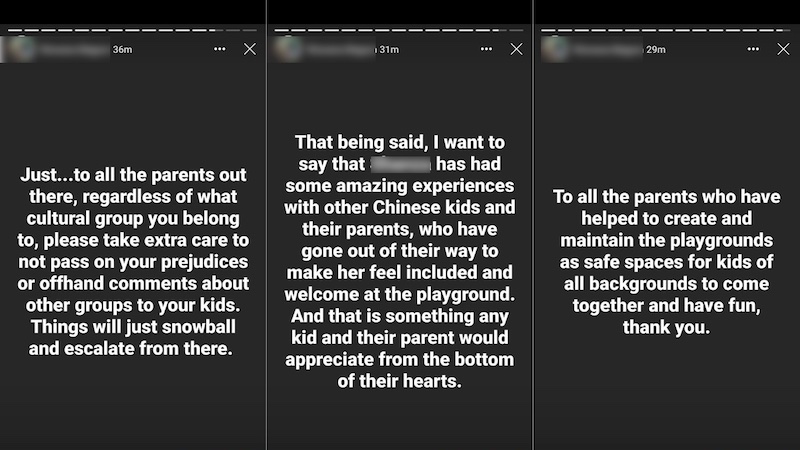 The repost of her story on Facebook has gone viral, garnering over 2,000 shares and hundreds of comments as of writing. 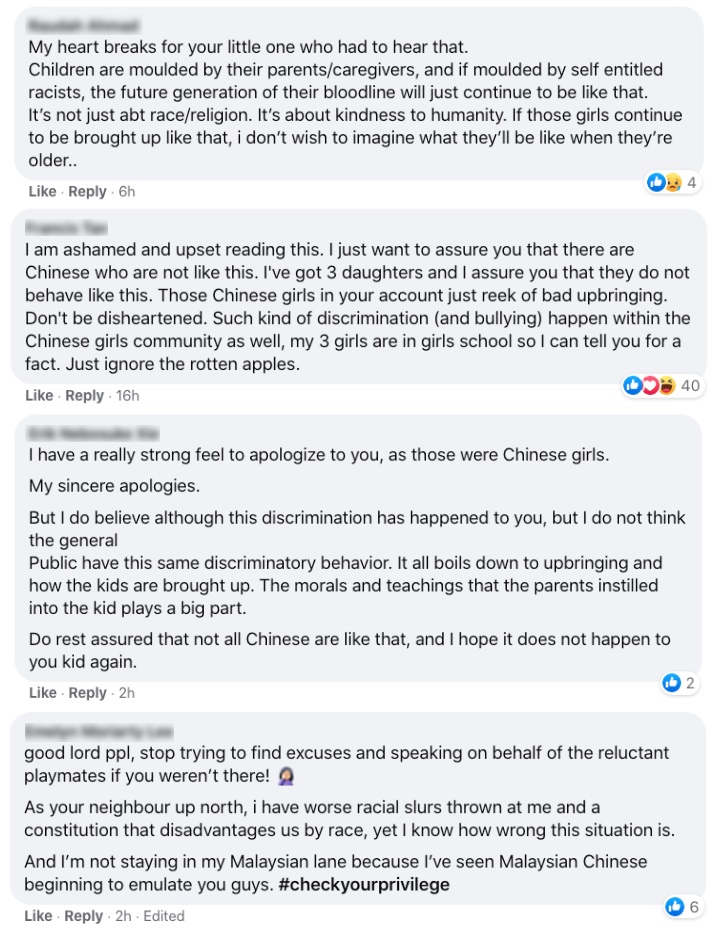 But there was also doubt. More than a few netizens questioned the story, asking what exactly from the children's actions was determined as racist. 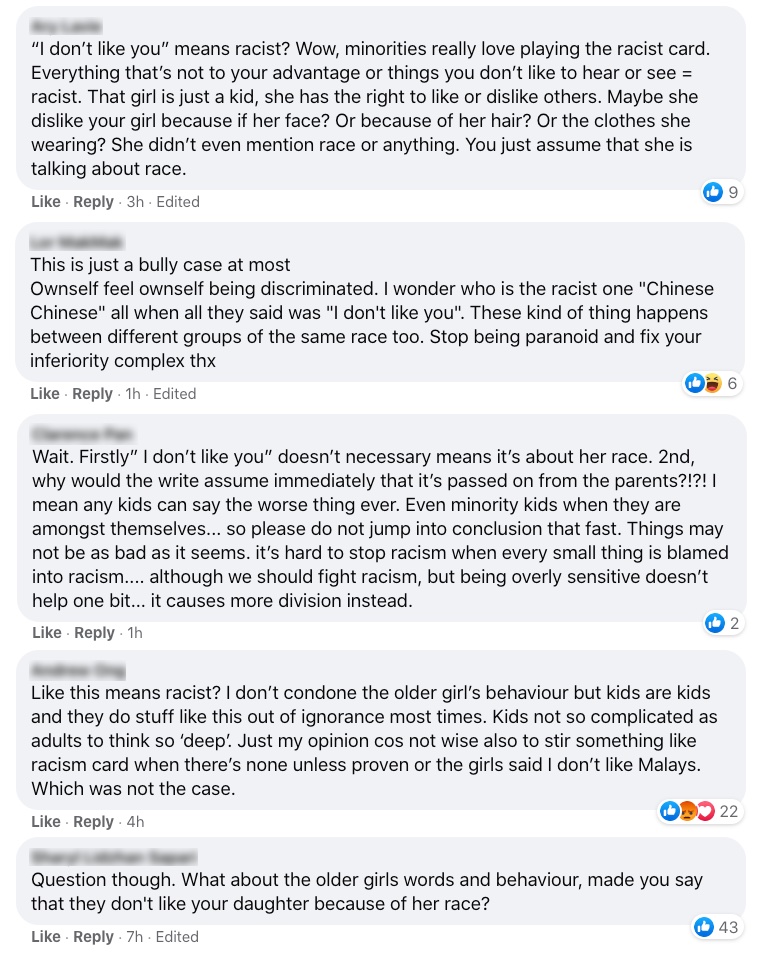 Some asserted to the mother and other commenters that it was more a case of bullying than outright racism. 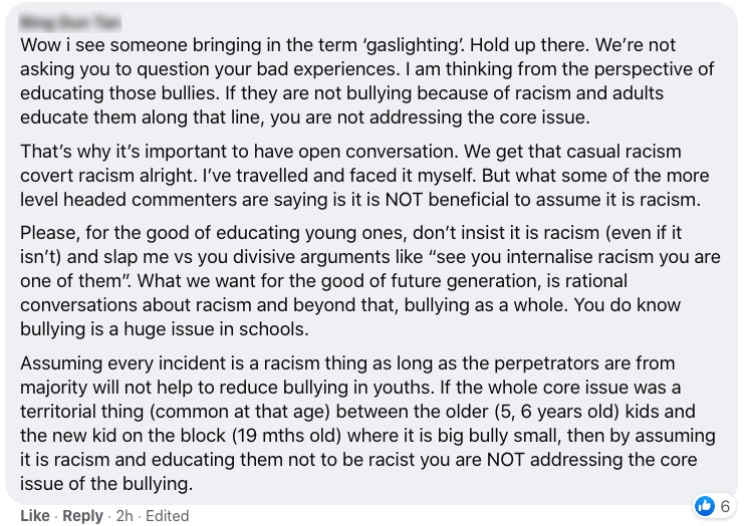 Regardless of whether this particular incident involved racism or not, it’s clear that outright intolerance is an issue among kids. Numerous anecdotes recounted by Singapore’s ethnic minorities on the Instagram page @minorityvoices show a perturbing pattern — incidents of casual bullying based along racial lines are commonly experienced from as early as primary school.

Back in March, a case of racial bullying that took place at Mee Toh School went viral, prompting then-Minister for Education Ong Ye Kung to issue a statement against the “unacceptable” behaviour.